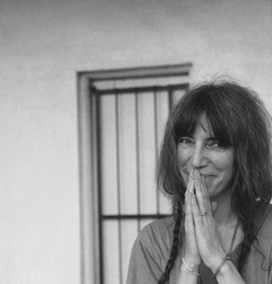 From the musical Annie, the song "Tomorrow" is given rock star treatment by Patti Smith, the rock poetess chosen for #100 on the Sunday Service because of her class, style, and respect for the fans that love her.

This has been a great year plus for Patti Smith and I can think of no one who deserves it more.  Though I wasn't as knocked out as the rest of the world by her autobiographical volume, Just Kids, I liked it fine and it certainly brought her much deserved attention.

Now, her rendition of "Tomorrow" I'm knocked out by; for me, a song from a musical qualifies as Litrock, though this is the first one on the list.  It is probably the least likely song I could have chosen for #100, or even from Smith's catalog, but there you go.  It gives me a chill every time I listen to it, chokes me up, grabbing me and not letting go.

When she urges on the late great Richard Sohl to a mildly bombastic crescendo, which she matches note for note, I am washed out on a tide of love, ennui, and beauty.

I dare you to listen twice.  You'll never stop.

As a bonus for the followers of this blog feature, here is an incendiary rendition of her song "Privilege (Set Me Free)" from the legendary boot "Exodus."

If that's not enough, a video performance of the same tune, that hits similar ecstatic heights.  There are many groups that have merged rock and literature, rock and poetry; this song may, however, be the consummate example.

One final note.  There are have been many interviews with  her over the past 18 months, both print and television.  At the commencement address she gave at Pratt University last year, her advice for artists was as basic as it gets (and, as such, as good as it gets):


Going into deep catalog territory for this poem from Lilliput Review #97, from July 1997, I think you'll find it  pushes more than one edge for sure.  For four other sample poems, plus a lovely Wayne Hogan cover (& some Jean Cocteau, Harlan Ellison, and Cid Corman, to boot), click the numeral way back there in the sentence before last.  Enjoy.

Before A Beginning (A Prototype)


The shape of each letter shapes the shape
of the word.  The letters are thin

(think "I").  The word could be wide,
fat enough to stretch from side

to side of this page.  This page
is boundary, setting an edge at the shape

PS  Get 2 free issues    Get 2 more free issues     Lillie poem archive
Send a single haiku for the Wednesday Haiku feature.  Here's how.
Go to the LitRock web site for a list of all 100 songs
Hear 'em all at once on the the LitRock Jukebox
Subscribe to Lilliput Review

Practical advice there on the teeth. I don't think I've ever heard that advice given at a commencement before.

Indeed, Charles. Experience is, no doubt, the greatest teacher, but to have the experience passed along by an older mentor is second best.

I liked Just Kidsd quite a bit. Not the best book I've ever read or anything like that, I wouldn't go that far, but I did really like it, truly couldn't put it down once I started reading it. The great stories about the musicians and artists and writers she's known, the deeply moving and ultimately heartbreaking account of her relationship with Mapplethorpe. Patti Smith can really write.

A few years back I saw the documentary film All We Are Saying, a collection of interviews with rock musicians, talking about music and their lives and the business end of making music in the present day. (The film was made, or released, in 2005.)

In one of the segments featuring Patti Smith, she's talking about the balancing act of touring with her band and raising children, that there were periods of time when she pulled back from doing live concerts because she didn't want to leave her kids at home while she toured and she didn't want to take them along and put them through all of that.

She then commented, in that context, on the need to make basic choices sometimes, and to think about the choices consciously, and she looked casually at the camera and dryly said, "Babies are cute, but they're not puppies."

Smith is probably the musician I admire the most playing today. I've seen her in concert twice and she was transcendent.

She tells two stories of Allen Ginsberg, I believe both were in "Just Kids" - one, about their first meeting in an Automat in NYC (when Ginsberg thought she was a good looking young man) and the second about standing in room during the process of his dying.

Both were full of wonder.

The story of Smith's first meeting with Ginsberg is in fact in Just Kids -- she told it with that wonderful combination of reverence and gentle (and somewhat self-deprecating) humor that infuses many of the stories she tells in the book.

I hadn't known that she was in the room with Ginsberg as he was dying -- that story isn't in Just Kids, which basically goes up through the time of Robert Mapplethorpe's death in 1989 and the months afterwards. I have no doubt that it -- like the story of their first meeting -- is full of wonder.

I've never seen her in concert. I've gone to only a few live concerts over the years, and the only musician I've gone to hear more than once is Joni Mitchell. (If my life had taken a couple of different turns at certain moments -- if I'd become a traveling music follower, as some people will chase the tours of Springsteen, or (used to) the Grateful Dead, for instance -- I might have become a Joni Mitchell follower.)

But yeah, Patti Smith is one of the great ones too.

Lyle, I think this comes from "The Life and Times of Allen Ginsberg" film. It is only a part of what I remember her saying.

I think the full excerpt was on Patti Smith's myspace page, but I can't find. She spoke of a group of Tibetan Buddhist monks around the bed, chanting, preparing the way, as it were.