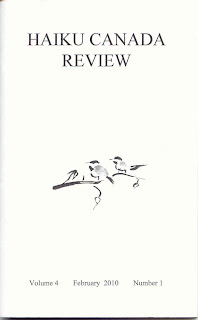 One of my favorite magazines is the Haiku Canada Review, published by Haiku Canada.  It's been awhile since I've mentioned it, so I thought I'd take a look at the latest issue that's graced my mailbox.

One of my favorite things about HCR is that it is jam packed with poems. Besides regular haiku sections, there are sections on haiku in French, haibun, essays, linked verse, reviews, and letters.  Edited by LeRoy Gorman, the work is consistently fine, running the gamut from fairly traditional to experimental.  H. F. Noyes's regular column entitled simply "Favorite Haiku" is not to be missed; he has an unfailing sense for superior work and his commentary is both insightful and spot-on.

Here are some favs from this particular issue:

His castle gone
a young boy brings
the ocean home

This poem, though seemingly sentimental on the surface (and it is), touches on the use of scale in haiku.  The castle, a miniature version of the "real life" thing, and the idea of a small boy bringing the entire ocean home, force the reader not only to deal with concepts versus reality, making us see that an idea can be as important as the thing itself.  Plus, I just kept thinking about this E. E. Cumming's poem.

in-laws
we sit in silence
as my wife pees

It's so quiet I think I can almost hear ... an uncomfortable silence.

I'm not really sure exactly why but the rhythm of this haiku made me slow down as I read and re-read and re-read it again. It has a long measured cadence - who thought anyone might ever say that about any haiku at any time!

autumn garden
a couple turns
to face the sun


I've been reading so much classical haiku poetry this summer that I immediately thought about Bashō's poem about the hollyhocks turned toward the sun even while it's rain. It is nice to see a poem where this instinct is shared amongst other living things.

his wings
hold her light
egrets

I'm not at all sure about anything about this poem except I like it. I suppose it all turns on the word "light," what it means in this context and the idea that one egret's wings might hold the light of another, so closely are they mingled.

From a review of Masajo Suzuki's Love Haiku comes these 4 fine poems:

spring sorrow-
I buy enough flowers
to embrace it

How much beauty does it take to convince a poet of life's ultimate sadness?

With the two words "nested" and "rattan" we are taken back to our elemental past, a retreat to an almost pre-cognitive state of sorrow.

It's no small irony that this is the second time in two weeks I ran across this poem; the first was when it was anthologized in Haiku: the Poetry of Nature which I reviewed last week.

a moth dances into the flame...
the nape of the man's neck
draws me in

Once again pacing, as with Noyes poem above, plays an integral part in the poem. The pacing of the line draws us in, as it does its actor, into the flame.

As was mentioned above, Noyes, in the column "Favorite Haiku," does not disappoint. Here are 3 exemplary works:

a child rolls a hoop into autumn

Noyes esteem for this poem is large, as it should be. It doesn't get much better than this.

from leafless trees
crow follows crow
into a cold wind

He finds he remembers Bash 's "crow on a bare limb" haiku, as I did, and compares it favorable - how could I not concur.

Swede is one of the finest poets working today. The playfulness of this haiku disguises how it embraces bigger things in a commonplace scene. Humorous and resonant, a hard won combination on the best of days.

from a review of the book Go to the Pine (per Bash 's instruction, I guess). This little two-liner contains the world, the universe, in its representing.

Frequently, HCR is accompanied by mini-broadsides, called "Haiku Canada Sheets," by individual poets and this time was no exception.  The sheets are a single sheet of 8.5 x 11 paper, folded twice width-wise, and printed on both sides, leaving plenty of room for poems to breath in an economical format (one I've occasionally used for Lilliput broadsides). This time round there is an outstanding little collection of 12 haiku entitled marionette on a shelf by Angela Leuck.  It is something of a lyrical chronicle of a relationship, from first touch to final regrets.  Here are a couple of my favorites:


Marionette on a shelf-
his fingers know
how to move me

his smile-
the slow smooth bend
of the river

On the Habit of Verse

Writing verse is like the proverb
About the drinking of wine,
Apt and perfectly true:


if only she were here
for me to nag...
Chrysanthemum Festival wine


In an editorial note to this haiku, David says that "This haiku refers (fondly) to Issa's wife, Kiku, who died earlier that year. Kiku means "chrysanthemum" in Japanese, so the Chrysanthemum Festival naturally reminds Issa of his lost Kiku."   The sense is certainly there without the note, but the dual nature of the word Kiku in the poem is not.  This example heightens a very important aspect of haiku that is most often lost in translation: wordplay, particularly punning.

thank you for this wonderful review of "Haiku Canada". A very well-known Canadian author (whose name I don't care to mention)once said, very stupidly, that Canada is not the place for haiku.

The Kiku poem is very moving.

The egret poem particularly captured my imagination. Perhaps because we see them so frequently here and they are such beautiful creatures.

Wow, what a great post, Don. I didn't know about this mag. and now I want to subscribe. Your selections/commentaries are marvelous!

Thanks very much, glad you liked it. Haiku Canada Review has been a favorite for many years - it has taught me a lot. It is international with a good representation of Canadian work.

I, too, was fascinated by the Issa Kiku reference.

Grant Savage did capture something almost beyond words there ...

Thanks, Theresa - it really is great. The caliber of poems and poets, the range, and the shorter columns and reviews all bring something to the table.

Don,in order to subscribe does one become a member first?

Info about subscribing is here:

It looks like $25 includes membership to Haiku Canada, a yearly subscription (2 issues of Haiku Canada Review - usually 50 plus pages jam packed with poems), 3 newsletters, a minimum of 6 Haiku Canada Sheets (8.5 x 11" trifold sheets often w/ lots of great poems) and inclusion in the annual Members' Anthology (a sizable chapbook with lots of work).

It is worth it, even though it may seem a little pricey.

Some lovely haiku--thank you for providing them! Love all those wonderful--sometimes soft, sometimes loud, but pretty much always surprising--turns!

You are welcome, Michael - it really is a fine magazine.