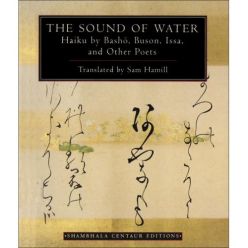 This little volume, translated with an introduction by Sam Hamill as part of Shambhala's Centaur Editions, focuses on 3 of the four major haiku poets (Bashō, Buson, and Issa), along with a handful of poems by other poets.  This post takes a look at his renderings of the haiku of Bashō

With just over 70 haiku by Bashō, this is a highly selective take on the master poet.  Many of the poems are familiar; all have a slight difference from other translations I've reviewed.  The most obvious difference is that the poems are slightly longer than most contemporary versions which, though running counter to the contemporary trend towards brevity, isn't necessarily a bad thing.  The first is briefer than most of its companions, is very unfamiliar in its presentation, and is quite good, indeed:

How very noble!
One who finds no satori
in the lightning flash

This poem is at once humorous, satirical (read biting), and serious.   The poet seems to be saying no to both obvious metaphor or easy enlightenment - notice, in English, the linguistic relationship between lightning and enlightenment.  Somehow, this seems very proscriptive, rather than descriptive, for a haiku poet.

But that's probably another reason they called him master.

This poem is familiar and captures a perfect moment.  The jonquil leaves are new to me, but the poem still carries its weight, literally and otherwise, very nicely.

Exhausted I sought
a country inn, but found
wisteria in bloom

Again, a familiar Bashō poem, but in this version I get a sense that the traveler is lost and, in his confusion, has stumbled on a happy accident in this cluster wisteria.  Certainly, the lack of a roof is lamentable, but the view's not bad!  Philosophically, the contrast between lost and found, highlights what is fine in life, if you wish to embrace it.

I've always liked this poem though it seems to run counter with Buddhist sentiment from one point of view.  Honesty here is the thing and the question arises: if a face is not beautiful, is it ugly?

Come out to view
the truth of flowers blooming
in poverty

This certainly is something of a radical rendering of the original which, as such, I don't remember at all.  Talk about direct pointing!   The poet tells us, here it is, the truth for you to see, despite of or because of the contrasting poverty.  This feels like a lesson of a Buddhist priest.

The unstated, pervasive presence here seems to be a blustery spring breeze, causing the viewer to see the temple's roof floating amongst the swaying branches, an image worthy of Buson in its painterly quality.  Hamill adds an editorial note that Kannon is a Bodhisattva of compassion.

Overall, the collection of Bashō's haiku in The Sound of Water are honestly not my favorite renderings; there are enjambed lines, unnecessary uses of the verb to be, and lines sometimes just too long, though the ones I've cited here I do like very much, in one aspect or another.  There were a number of other fine translations here also, most so close to others I've noted recently that it seemed it would be repetitive to discuss.  The translations were fine; I just could bring nothing new to them.

Fall is upon us in a big way, suddenly full fall, not the usual easing in, the customary days of deep, beautiful, almost viscous light.  There is hope for a return of some milder days before heading to the big freeze.  This week's feature poem from Lilliput Review #129, March 2003 (which was the 1st issue highlighted when this blog began nearly 4 years ago), has in mind the deeper meaning of things our minds turn to in autumn.

year after year
through the half-empty branches

I am in love
with the struggling ones


a new face
in the flock...
rice field geese

I have the same book--The Sound of Water--and I think Hamill frequently "interprets" the poem, rather than present the images in the poem and allow the reader to react.

One of his translations that I did like was

A solitary
crow on a bare branch--
autumn evening

Here it's just images--a crow, a bare branch, and an autumn evening. He allows the readers to participate this time and react without his guidance.

Fred, yes indeed I think you're right, on both counts.

The Bashō poem is as it should - images presented for the reader to do what s/he will.

well as a 'reader'


me-thinks that it is easier to translate another's lang than to
write in one's own ... a good poem (?)

I pretty much agree with your comments here. In general, while I've mostly enjoyed Hamill's translations (of haiku, and tanka, and of Basho's prose-and-haiku journals (I forget offhand the Japanese word for those), I've felt in his translating a slight distance, or distancing.

I relate it to Fred's comment above -- I agree that Hamill sometimes tends to "interpret" them poem rather than presenting it directly. Not in every case, but I do feel this about his translations sometimes.

Years back I read, and really liked, Sam Hamill's book Basho's Ghost (published by Broken Moon Press in Seattle, and long out of print as far as I know), more or less an account of his travels in Japan for a year or so, and exploring much Japanese poetry -- by various poets, of various periods -- along the way. I like it the most of everything I've read by Hamill.

Thanks very much for the note and pointing towards "Bashō's Ghost." I will definitely check it out. Going to visit a little more with "Sound of Water" in two future posts.

Ever since I was captivated by Baudelaire's work a number of years back, I've been fascinated with putting different versions of poems side by side and feeling the totality of the translations. This seems to just begin to give a sense of the original poet. It's why I never come down too hard on any one approach - it's just another glimpse, moving a few steps along the ridge to see the sun sinking from a slightly different angle.

Your comments regarding _Basho's Ghost_ spurred me to go searching for the book.

It is back in print again, or at least as recently as 2004, when an edition came out published by
Carnegie Mellon Univ Press.

Back when I was teaching, I had a recurring problem with students when working with stories in translation. Frequently they would have different translations, and the question always came up--Which is the right one?

I then would distribute a handout with 7 translations of Basho's poem about the nameless little hill and point out that if a short poem such as this one could bring about a variety of translations, that it shouldn't be surprising that a long prose story would do the same. Translation is not an exact science.

Like you, Lyle's comments spurred me on to look for Bashō's Ghost - I've a copy coming my way.

Interesting, about the multiple translations. Next week, I'm teaching a group of lifelong learner's an introductory session to haiku (first one for me) and one of the things we'll be looking at is 6 different translations of a Bashō haiku (plus a transliteration of the original). One simple haiku, the first translation of which really didn't do much for me, has, as a result of all the translations place side by side, gotten me completely in its thrall.

Here's the first translation that spurred the whole thing:

By the time I was done I realized that I'd gotten as close to an explanation of the mystery of all things that I'll probably ever get.

Thanks for the Beilenson - interestingly, that is not one of the 6 translations I am going to discuss and it definitely brings something different to the table. Here are the other five:

As the sound fades,
the scent of flowers comes up–
the evening bell.
tr. by Robert Hass


The temple bell dies away
The scent of flowers in the evening
Is still tolling the bell.
tr. R. H. Blyth

The temple bell stops –
but the sound keeps coming
out of the flowers.
tr. Robert Bly


As the bell notes fade,
the scent of cherry lingers.
Evening twilight.
trans. by Tom Lowenstein


There is so much here I hope to work up a future post once I've given the presentation.