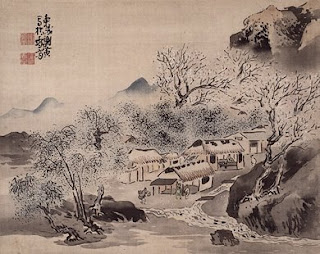 Bashō and Issa get most of the good press, Buson's work being portrayed at times as cold and aloof.  Still, compared to Shiki, Buson is downright engaged with the rest of us lowly mortals.

Last week I took a look at Sam Hamill's renderings of Bashō in his beautiful little book, The Sound of Water: Haiku by Bashō, Buson, Issa, and Other Poets.   This time round, it's the artistic, painterly Buson.

From this small selection (47) of Buson's haiku that Sam Hamill has translated, the following 5 grabbed my attention.

Here, the mutual virtue of loneliness and a lovely autumn twilight come together in a very distinctive way, calling to mind how sadness and beauty and transience all intersect in Japanese culture in the concept of wabi-sabi.

The thwack of an axe
in the heart of a thicket-
and woodpecker's tat-tats!

The comparisons and contrasts in the two essential elements of this haiku - the woodsman and the woodpecker - are really multiple.  It is not only the actions, it is the intent.  We think more of the contrast between the woodsman and the woodpecker but what they share is of greater importance.   This haiku resonates aurally, visually, and philosophically.


This cold winter night,
that old wooden-head buddha
would make a nice fire

Worthy of Issa, Buson's sentiment is known to all in need, whether of fuel, food, or love.  So easily our beliefs are put aside for our needs and right you are, as the poet said.   First and foremost here, however, is the need to laugh long and hard at ourselves.

It would seem that the speaker is lost, or at least in unknown territory, since the river's name isn't known.  This feeling evokes the fear itself, which is nameless because it is undifferentiated, it is irrational fear - fear of the unknown.  Lost, in an unfamiliar land, possibly in the torrential downpour of the rainy season, instinct takes over.  A most uncharacteristic haiku from a classical master.

This last one is pure Buson.  How minutely observed the scene is - is dawn all one color, is the light a real color at all, or is the color of the plum blooms simply realized in the breaking light?  It would seem this haiku was done with a paint brush and not a writer's implement.

Next week, if all goes well, I'll take a peek at Hamill's Issa.


Her last night, my mother walked into
the kitchen where I was standing
and when I looked at her

the shadow of something huge
passing over her face—

What's wrong, I asked.
I don't know, she said, and smiled.

Here are two more, by two masters of another sort, the same topic:


my dead mother--
every time I see the ocean
every time...

Go to the LitRock web site for a list of all 73 songs
Hear all 73 at once on the the LitRock Jukebox
Posted by Issa's Untidy Hut at 6:18 AM

Your comment about Shiki reminded me of this one by him, found in _The Sound of Water_. This one stood out among his four in the book.

O autumn winds,
for me there are no ancient
gods, no buddhas for me

The following is the one by Buson that jumped out at me.

A lightning flash--
the sound of water drops
falling through bamboo

I think it's the contrast between the constant sound of water and the sudden flash of illumination.

I really like the top one about loneliness. Very true at times.

You've anticipated my post on the remaining miscellaneous poems - the Shiki is very good, indeed, and perfectly captures his new approach to hokku, which he renamed haiku. Hamill must have liked the Buson also since the volumes title is the same (and, of course, resonates with Bashō's frog poem also).

That's that ennui, that wabi-sabi again.

Yes, there is that resonance. In fact, Hamill's translation of the frog poem is my favorite (I have _100 Frogs_, so I've seen a lot of them).

It almost reads as though the frog is jumping into the sound of water.

I agree, Fred - Hamill's is a fine translation of Bashō's pond poem - I've got the 100 frog one myself.

Here's a great webpage with 30 translations, plus commentary.

Thanks for the link. It looks interesting.