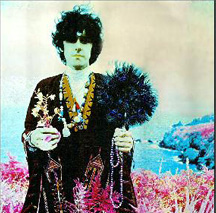 This week's selection for Issa's Sunday Service has a double literary pedigree: it is a song written by William Shakespeare, from Act II, Scene V, of As You Like It and the title of a Thomas Hardy novel after the Shakespeare song. In any case, this is a fine adaptation by Donovan.

Back about two years ago, I had a little something to say about this Hardy novel while blogging at my other job.  Hardy is one of my unabashed favorites.  Shakespeare and Donovan, too, for that matter, though none seem to be in the haiku business.

Here's an amateur video of Tom Waits performing Lawerence Ferlinghetti's poem "Firemen" from Pictures of the Gone World at the recent Litquake festival in San Francisco.  This is the long version with a typically wonderful Waits intro.

Lilliput Review #109 featured a parcel of haiku and other short-short pieces.  Here's one that was a little longer, calling an old friend to mind, reminding us of the true value of much literary criticism, and all the moon's light:


Po Chui, we are told, wrote
too many poems on subjects
of no special significance.

Across eleven centuries
we can still see the poet's brush
draw the least leaf to life.

The critic's words, as our breaths
on a winter's night, are
bright in the moon's light.


my lute set aside
on the little table
lazily I meditate
on cherishing feelings
the reason I don't bother
to strum and pluck?
there's a breeze over the strings
and it plays itself


Children imitating cormorants
are even more wonderful
than cormorants.

this poet (Bai Juyi), with his old brush in hand
is his own best critic ... in the truest sense of what a critic is...

even via translation one can "feel" that (...) not a single word/breath is "lost"

I almost forgot to include two working-n pieces just you provoked:

full moon waiting for me

well, Ed, this bud's for you - two great poems, and yes I was thinking of my 1200 year old friend and thanks too for link to your not-so-baltimore oriole ...

for the few who pay true attention ...

less is more exactly what I said to publisher this morning when I sent off final final ms with 25% cut - by me - perhaps it will someday see the light of day (or the moon) ...

"I remember the days when I served before the Throne
Pencil in hand, on duty at the Ch'eng-ming"

The Chinese word for the Chinese lute (as it's commonly called in English) is generally transliterated as "pipa" or "pi-pa." Which to my ear (even not knowing the how the word is toned in Chinese) already carries onomatopoeic sparkle.

A little while back the PBS News Hour did a feature story on Wu Man, a present-day master player of the pipa. I've listened to a couple of CD recordings of her, just exquisite. She's also one of the numerous musicians featured on the Silk Road Ensemble CDs headlined by Yo-Yo Ma.

Wu Man's website is here, for anyone who cares to check it out.

Googling, on impulse, Po Chu-i (using that spelling), I found this poem by W.S. Merwin, in The New Yorker last march, quiet and sad and beautiful.

And found a small and nicely-chosen selection of translations of Po Chu-i's poems, here -- some of the translations are by Arthur Waley, and some by Henry Hart (with whom I wasn't previously familiar).

thnx for the Wu Man link... a new discovery for me... and the pi-pan that she plays ... I think that I am (again) risin in love of...if I was 40 years younger, I'd ask her "Can I buy you a cup-of-coffee?"... mean-while; closest thing to pure sound is sound of western harp's notes cascading to-and from that lute/harp...and its
concomitant Solitude

Thanks very much for the information and links. I'm listening to the Wu Man sampling right now and enjoying it very much. I've just put a cd on hold from the library and will look forward to that. Thanks, too, for the links. I'd been reading Po Chu-i poems from that website earlier today.

The Merwin is potent and so much more effusive than he has been of late. His use of exile, the goose, and the wars is so very contemporary, in its own way.

I love how easily and deeply and blissfully you fall in love ... with more people like you, the geese of the world might enjoy relative safety.

The Wu Man is wonderful and a great complement to the poem.

for those who's fingers walk to elsewhere...

check these films out :

Thanks for these - I listened before work to the very generous selection of her work on her website. Astounding the depth and breadth or her work ... a parcel of work with the formidable Kronos Quartet, too.

wanna her my Donovan story?

on the way back to The States from Greece in 1970 I stayed over in London for a couple of weeks... lived on a friend's friend's little boat tied up on the Chelsea Embankment

so after about the third straight night of "noisy" on the boat next to me I shout:

so they quieted it down.

nest morning this girl comes over and says:

"You know who you shouted at? THAT was Donovan."

Donovan and his errant ways - saw him perform in 1970, was sensational, still one of my favorite performers.

His autobio, however, was one of the worst most ego ego ego-filled pieces of tripe ever. Besides influencing everybody and helping write many songs of the name-dropped, it seems before there was god, there was Donovan. This from Mister TM.

Whew, just needed to get that off my chest. The autobiography was that bad ...

Under the Greenwood Tree counts as a triple literary reference! Donovan adds some lyrics by Lewis Carroll.

I completely missed that! Thanks. So I see he has added some lines from Carroll's Lobster Quadrille." Thanks very much for the heads up.

Though I usually send out free issues for a suggestion for the Sunday Service, I'd be happy to send the two new issues (or two additional issues if you already subscribe) in appreciation of your paying such close attention.

If you'd like the issues, drop me a line at lilliput review at gmail DOT com with your snail mail address and I'll send them right along. In any case, a big thanks.