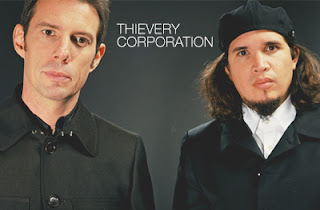 Today's featured song is only the second instrumental so far in this ongoing literature meets rock and roll project - the first actually did have a few words, but was largely instrumental.  Today's selection is courtesy of The Thievery Corporation.

The Glass Bead Game by Hermann Hesse, the inspiration for today's selection, is one of my favorite novels by one of my favorite authors.  Largely overlooked by fans and readers in general, it is certainly one of the finest novels of the 20th century, well deserving of the Nobel Prize that it garnered for its author.  It reprises all the great themes of Hesse's career, from duality through transcendence.  There are bits of all of his great books here, if in slightly disguised forms: Siddharta, Demian, Steppenwolf, Narcissus and Goldmund, and Journey to the East, as well as many of his early student novels.

Narrated by a fictional biographer, with introductory and supplementary material, the larger part of the book passes for a partial biography of Joseph Knecht, a great Masters of the Bead Game or Magister Ludi.   Set in the 25th century, it relates the story of the intellectual province of Castalia, where the students all learn the glass bead game, a sort of interdisciplinary exercise of connections among all the great fields (literature, music, science etc.).

The folly of such an exercise, removed as it is from "the real world," slowly and steadily becomes apparent, no matter how attractive the concept.  And attractive it is; witness the proliferation of exercises online attempting to recreate its chief philosophical premise (& that's just a handful).

Some have gone so far as to suggest that the internet itself is the glass bead game manifest.  We won't go down that road but we will take some time to chill to the groove of The Thievery Corporation, a dance-acid jazz-trip hop band, that knows the ins and outs of the outs and ins.  I just learned of them last week and I'm already listening to third of four albums I could rustle up from the library and, well, they make me relax and smile.

So there you go.   The cut may have nothing more to do with The Glass Bead Game than a shared title, but if it made me mellow, well there will be no argument from me. 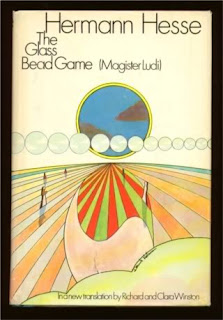 Sticking with the theme of the unusual, here is a composition performed by Jacques Burtin performed on the kora, entitled "La Lumiere Matin (Morning Light)," a piece the composer describes as a prelude to The Glass Bead Game.


This week's featured poems come from Lilliput Review, #102.   It is a triad of pieces that all appeared together on a single page, the stitch just tight enough to pull us through ...


Our hearts are empty for the Beloved,
and streetlamps are endless in the night.


All those guys
holding hands with Kali are
already rotting away


even the heavenly gods
crowd 'round...
plum blossoms

PS  Get 2 free issues     Get 2 more free issues     Lillie poem archive
Send a single haiku for the Wednesday Haiku feature.  Here's how.
Go to the LitRock web site for a list of all 96 songs
Hear 'em all at once on the the LitRock Jukebox
Subscribe to Lilliput Review

Definitely interesting. I can't remember hearing it before but it's got some nice change ups in tune and tone.

I don't know about the music, but I have read _The Glass Bead Game_, and it's one of my favorites.

I also have spent a little time trying to work out how the game would go, but ended up baffled.

The concept of the interconnectedness of all knowledge is what I find most fascinating.

what "interconnects" all knowledge .... simply:

that ALL who peruse/pursue/seek it are, every one:

do check out Shattuk's FORBIDDEN KNOWLEDGE

then go eat a Gala Apple

Charles, glad you liked the vibe ...

Fred, the music isn't even an acquired taste - most folks see it as a white noise version of muzak, but I do like what these two guys are doing. The Hesse, though, is sublime ...

Ed, to send the seekers back out on the path - pay no attention to the man behind the curtain! - quintessential Baker. I've put the Shattuk on hold at the library:

From Prometheus to pornography, indeed.

I read _Forbidden Knowledge_, but it was some time ago, so I don't see the connection to _The Glass Bead Game_.

One (FK)was about gaining knowledge that humans should avoid while the other (TGBG) seemed more to be about making connections among what is known.

However, as I said, it's been awhile since I read Shattuk.

In any case, it's a good recommendation, and I second it.