Some Thoughts of R. H. Blyth 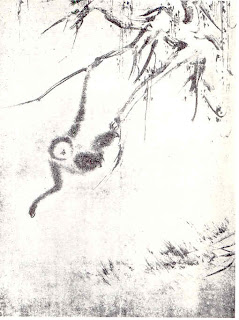 It's been over three years since I speculated that it would take me awhile to read and report back on the 4 volume colletion of Haiku by R. H. Blyth and it seems I was right.

Over those years, volume 1 has sat next to my bed, moving up and down the immediate pile of books to be read, occasionally picked up, dipped into, and very much enjoyed.  Lately, I've been reading a section on haiga and haiku.  Having to lead two groups over the last two weeks through appreciation of haiku sessions, I was particularly attentive to the following:


What Bashō wanted to do, however, was to condense without heaviness, to refine without dilettantism, to philosophize without intellection.  This he could find done in pictures already.

When you are working on trying to communicate a cogent definition of haiku to folks new to the form, you pay attention when you run across a statement like this.  Further on, as Blyth sums up his thoughts on haiga and haiku,  he notes that roughness and humor are two admirable qualities of haiga.  He continues:

The insistence on the fact that humour is to be seen everywhere, under all circumstances, which is the special virtue of haiku, is also the distinguishing quality of haiga, and one which keeps it most closely connected with this world and this life.  Art comes down to earth; we are not transported into some fairy, unreal world of pure aesthetic pleasure.  The roughness gives it that peculiar quality of sabi (Ed. note: B's emphasis, not mine) without age; unfinished pictures, half-built houses, broken statuary tell the same story.  It corresponds in poetry to the fact that what we wish to say is just that which escapes the words.  Haiku and haiga therefore do not try to express it, and succeed in doing what they have not attempted.

Here are two of  Bashō's poems, as translated by Blyth, from volume 1 of his Haiku:

Yield to the willow
All the loathing, all the desire
of your heart.

In the midst of the plain,
Sings the skylark,
Free of all things.


We all sit and wait and pray over developments in Japan.  There will be another post from Scott Watson in Sendai tomorrow.

For now, this week's featured poem comes from Lilliput Review #143, June 2005.  It is a translation of a Japanese classic.

We wait and hope.


A spring day
filled with tranquil light.
Cherry blossoms,
why are you
falling so restlessly.


without you--
how vast
the cherry blossom grove

PS  Get 2 free issues     Get 2 more free issues     Lillie poem archive
Send a single haiku for the Wednesday Haiku feature.  Here's how.
Go to the LitRock web site for a list of all 94 songs
Hear 'em all at once on the the LitRock Jukebox
Subscribe to Lilliput Review

I've been reading Leaves of grass for about 5 years.

Charles, me, too - our poetry discussion group is doing Whitman this month, so I'm steeped ...

What brought up Father Walt?

What a great post, Don! R. H. Blyth still my most loved writer and translator of the form. He just inhabits all the broken beauty, warts and all. Completely enjoyed your selected excerpts and that ending with those Basho poems in particular. And thanks to you, for real joy!

Thanks for this, Don. I just got my hands on a 4-volume set of Blyth, early editions in beautiful shape, and I have had much the same response as you to them. (I read your earlier posts as well.) I too love that brilliant preface stuffed full of big ideas that may or may not be right but are so exciting and beautiful to think about, and Blyth's propensity to refer to Western poets when discussing haiku. And I hadn't noticed that quote from Basho before, but having thought really hard over the last few months about what I am trying to do when I write haiku, I can tell you that that's pretty much what I've come up with, except I hadn't put it into such beautifully turned phrases. Need to write that down and put it somewhere where I can see it on a daily basis.

It will probably take me three years to get through these too, but I think I need that much time to absorb what is in them.

Well, it seems we all three agree that even when we don't agree with Blyth, he is always worth the cogitation. I'm cooking up another post with his thoughts, maybe in a week or two.