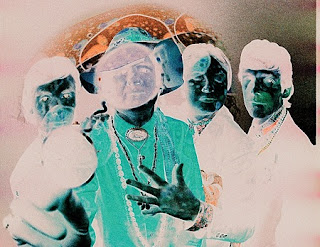 This week's feature on the Sunday Service, "Jason and the Argonauts" by XTC, isn't a straight out rocker, not a song you can cuddle up to, and is really hard to define.   A description from the blog "500 Songs" catches some of its quirkiness and mystery, but there is some other indefinable something about this tune.  First, make sure you crank the volume a bit.  And, since this blog feature is all about LitRock, there are the lyrics to consider:


Jason and the Argonauts

There may be no golden fleece,
But human riches I'll release

Oh, my head is spinning like the world and its filled with beasts I've seen,
Let me put my bag down and I'll tell you it all right from the start,
Like the scarlet woman who would pick on the boys she thought were green,
And the two faced man who made a hobby of breaking his wife's heart.

Seems the more I travel,
From the foam to gravel,
As the nets unravel,
All exotic fish I find like Jason and the Argonauts

There may be no Golden Fleece,
But human riches I'll release

I was in a land where men force women to hide their facial features,
And here in the west its just the same but they're using make-up veils.
I've seen acts of every shade of terrible crime from man-like creatures,
And I've had the breath of liars blowing me off course in my sails.

Seems the more I travel,
From the foam to gravel,
As the nets unravel,
All exotic fish I find like Jason and the Argonauts

There may be no golden fleece,
But human riches I'll release.

Jason and the Argonauts

There may be no golden fleece,
But human riches Ill release.

Jason and the Argonauts

There may be no golden fleece,
But human riches I'll release.

For me this is just another rock song copping another riff until verse 5.  Then lyrically it takes off.  Musically, it is a whole other furry beast.  Fortunately, there exists an extended explanation by the lyricist and driving force of XTC, Andy Partridge, who unpacks the song, musically and lyrically, here in a fascinating interview specifically about "Jason and the Argonauts."  If you are inclined to read this long, wonderfully detailed piece I recommend you put the song on loop as you do.  It gets in your bones.


"The whole thing is almost as if you're in an incredibly fast boat, and you're looking over the prow just staring into the sea for a couple of minutes. That's the whole essence of the song, really. It's almost as if the little vocal motifs that come up are like dolphins jumping by the prow or something.  "               --- Andy Partridge

This is XTC's first appearance on the Sunday Service, which is kind of surprising since they are something of the quintessential artrock band.

Here is perhaps there most famous song, given the classic MTV treatment; fortunately, though the video has dated, the lyrics are not, right up to the powerful ending:

One final note about XTC; they have an alter-ego as the psychedelic band, Dukes of Stratosphere, which, in fact, I'm an even bigger fan of.  If your are a psyche music fan, I highly recommend Chips from the Chocolate Fireball, the compilation album that contains both Psonic Psunspot and 25 O'Clock in their entirety.  Here is a static video which will give you an idea of how sonically inventive they really are (if you didn't catch it from Jason).


"Brainiac's Daughter" recalls, by name association, a thriller of a Mexican horror movie, Brianiac. The reference is more directly, however, to the character Brainiac from the 50s Superman story (in Action Comics), though there was no daughter of Brainiac.  However, Wikipedia tells us, the reference came full circle in the 4 issue limited series comic, Kingdom Come, in which Brainiac's daughter was created in homage to the song.

Finally, this is not the first time Jason and the Argonauts have been referred to on the Sunday Service, replete with the commensurate skeleton fighting scene (click picture at the previous link).   Since I've already posted the skeleton scene, here is the awakening of Talos, as mentioned by Andy Partridge in the interview, above:


This week's selections from the archive come from Lilliput Review, #105, which was featured twice before on the blog.   These 3 poems opened the issue; C. C. Russell sends up what I've been trying to do for the last 23 years, largely unsuccessfully (me, not C. C.), in a spot-on satire, and Kelly Donlan's short precise little poem bridges the gap to David Chorlton's miniature masterpiece, which at once nails what is done, when it's done right, and how (it is done).  Enjoy.

Formula For A Short Poem Under Ten Lines

October wind
blows to pages
I am not ready for


On paper
left to breathe,
the eye completes
what strokes
of green began

PS  Get 2 free issues     Get 2 more free issues     Lillie poem archive
Send a single haiku for the Wednesday Haiku feature.  Here's how.
Go to the LitRock web site for a list of all 94 songs
Hear 'em all at once on the the LitRock Jukebox
Subscribe to Lilliput Review

you've Johnny-on-the-Spot
provided me with a shot-cut:

was just about (sometime (maybe) today

track down Apollonius Rhodius'
The Argonauts
(the 1900 version , which what you link to is
so I ordered a paper copy)
as and here are a couple of connects to my me-of
it all and circular:

-reading section re Guillaume Apollinaire ( The Banquet Years) and
a. Apollinaire around 1900 REALLY identifies his self (selves) with Apollonius
b. should have read The Argonauts when living on Rhodoz (1958/9)

and c through J

around 1900 H.G. Wells(that you also mention) was VERY BIG with that group...(Apollinaire, Picasso, etc)...

As always, Kokkie-san, happy for the text, context, and rest ...

Thinking, today, on all the manimals ...