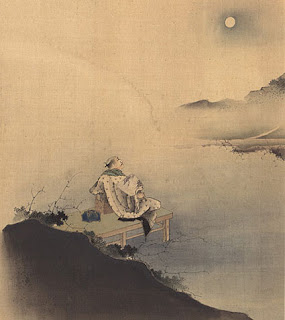 A new issue of Haiku Canada Review came across my desk quite awhile back and I'm finally getting to it .  As I've mentioned before (and before that), it is one my favorite haiku mags. It comes out three times a year, is always jam packed with interesting, challenging work, including haiku, haibun, linked verse and reviews, all of which are at once thought provoking and inspirational.  Editor LeRoy Gorman deftly blends together the traditional and experimental; in the 10 years I've been reading I've never been disappointed.

The October 2010 issue is no exception. Here are a few highlights from that issue:

temple pond
the moon floats by
just out of reach

A classic haiku in form and execution, calling to mind Li Po's (Li Bai) famed adventure trying to embrace the moon.  While looking up this legendary incident, I ran across a website with 40 different translations of his own poem about drinking and the moon, (variously titled) "Drinking Alone by Moonlight."

Dust motes in the golden light of autumn seem a universal, almost a collective conscious memory.  It is the time of the year, the slant of the sun, the balance of low humidity, and atmospheric pressure - and it is magic.


the vagrant
reasoning with someone
who isn't there

With the ubiquity of the cell phone and other connective devices, it's often hard to sort the disturbed from the disturbing.  "Reasoning" is the perfect word here because the vagrant, like the actor in a play, is completely convinced, and convincing, in his role.  The phonies, pun intended, you can smell a mile away.


This next poem begins:

and I thought, oh, the ennui, I'm not sure if I'm going to like where this is going, when it suddenly pivots on its axis:


another motel
this time nearby
frog songs

Perfect: the commonplace is transformed and, come to think of it, that's as good a definition of haiku as I've run across this week.  The frog pulls us back where we belong - the time, the place, the uniformity all fall away for a timeless event.

Here's another poem with a less than promising opening line, that takes a great turn:

Funny and sad and ominous at once, all in 8 words, quite a slick feat.


not so sure
but the waxwings want them
ripe red berries

Here the poet, like an expert fisherman, lets the truth come to him, no easy task for the amateur.


her tennis arm -
a swan dips its head
to the water

On one level, this feels mundane, but there is something sublime here.  To see how close this poem comes to not working, simply place the 1st line last.  The shape and movement of the swan's neck raises the tennis arm, something usually ignored, to a thing of exquisite beauty.  Reversed, the effect would have been opposite.

cadence of bells
frail arms lift for a change
of clothes

This haiku from a haibun by Roberta Beary resonates, not only with sound, but motion.

The following is a verse from a renku:

Well, it doesn't get much better than this - a haiku poet at exactly the right place at the right time, and paying attention, to boot.


hearing the train whistle
bound for the city...
here in the city

This reminds me of the poem by Bashō about longing for Kyoto while in Kyoto.  There is more than nostalgia here, though I believe the two poems share a deep sense of longing, perhaps under very different circumstances.

Than again, perhaps the circumstances are nearly the same. Love, and the love of love, are universal.


from the bridge
between my hemispheres
grandfather still fishes

This is another beauty by one of our modern masters; we are firmly in the present moment and at the same time, lodged in the past, all in the gray matter, deftly separated by the poet, into the two hemispheres of his own brain.  Brilliant.

This is touching in every sense of the word.  Each and everyone of us who have been there have done this and we may not have even made a conscious decision to do so or had the self-awareness to realize why.

birthday surprise -
no extra waves
on the ocean

This poem comes from a review of Gary Hotham's book Spilled Milk: Haiku Destinies.  The reviews in HCN are always very good and here is what the reviewer, Guy Simser, had to say about this one:


Read this literally and see a tranquil seashore picture.  Read this more deeply and you sense an ego deflating. Make of it what you will folks, He says, that's all there is.  In the time it takes a hummingbird to disappear and suddenly reappear in a different place....there's your haiku, back with a new meaning.

I like Simser's take here, most especially because he notes that Hotham's poem is so good it allows more interpretations than his own.  My kind of critic ...


For more on Haiku Canada, visit their website.   Membership includes a subscription to HCR, published 3 times a year, plus newsletters, a Members' Anthology and Haiku Canada Sheets.  Or, if you prefer, subscription includes membership, with all of the above as noted.

Checks or money orders should be made out to "Haiku Canada" and mailed to:

Submissions are open to members and non-members.  Haiku, related writing, letters and reviews are welcome.  Send to:


Lately, I've been talking to John Bennett a bit about our mutual acquaintance - a friend of John's and an acquaintance mine from my editorial work - the late artist and poet, John Harter.  John had something many poets would, and have in fact, died for: a unique voice.  I often think of him when I think of Albert Huffstickler, not because their work was similar, but because they both had genuine, unique voices that cut to the quick of things.

As many of you who have been reading this blog for any length of time know, every week, usually a number of times, I feature work from past issue of Lilliput Review.  Currently, the Friday and Sunday posts have poems from the mag.  I've been doing this so long that I've gone up and down the full run of Lillie issues, up to #178 now (I'm currently laying out 179 & 180), a number of times.

In looking at #142 this morning, from back in January 2005, I noted that I've featured poems from this issue twice before and that there are still a bunch of poems worth reprinting.  What I didn't think I would stumble on is poems by John Harter I had yet to feature on the blog.  And what a wonderful surprise it was.

Here are two poems by John.  Everything he did was written in caps, with his delightfully eccentric spelling (and, in one case here alignment - that's right, this isn't just another Wentworth f-up).  I hope you enjoy these two; they are beautiful in, perhaps, a little mellower way than usual for John.

It was one of the great honors and delights of my 23 years (and counting) editing this little rag to have made John's acquaintance via poetry.

PS  Get 2 free issues     Get 2 more free issues     Lillie poem archive
Send a single haiku for the Wednesday Haiku feature.  Here's how.
Go to the LitRock web site for a list of all 93 songs
Hear 'em all at once on the the LitRock Jukebox
Subscribe to Lilliput Review

this post IS a "prize-winner" : The Maxwell House Prize

'good to the last drop'

Excellent and in depth review. This one certainly looks like it's carrying some great stuff.

Ed, I am sincerely bowing my head for the honor ... means so much my friend.

The modern magazine anthologies Haiku Canada Review and Modern Haiku humble and inspire simultaneously when I read them.

I feel I'm a student at the feet of each and every one of these fine poets.

Susan Constable has contacted me with updated subscription/membership info for Haiku Canada. The address has been corrected within the post also: