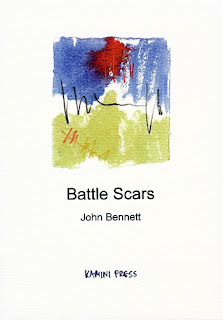 When it comes to class acts in the poetry world, only a handful come close to Henry Denander's Kamini Press.  I've waxed on and on about the press previously, with review of two previous publications.  Pictured above, and excerpted below, is another fine volume from Mr Denander:  John Bennett's Battle Scars.


Battle Scars is something of an anomaly:  it feels as though Bennett has invented a new form, an astute amalgam of the the short poem and the aphorism.  Though the work is in natural language, or perhaps because it is, the pacing is precise. There is no mistaking Bennett's opinion on a particular subject; he is straightforward, plain-spoken, cynical, perceptive, and sarcastic.  All of which add up to one thing.

He is battle scarred.

In one little book, Bennett has solved the age-old conundrum of experience versus learning.  In Battle Scars, you may learn, at what seems as close to first hand as you can get, from someone else's hard won experience.

We will
not do
what we
need to
do to
save ourselves.

We do not
have it
in us.

How's that for an empirical statement on the human experience?  New agers need not apply here.  Self-helpers, keep on walking.

Even zen-sters seem to be nodding appreciatively, or maybe that's just a no.  Hmn.

The less
you know about
what's going on
the better
you can
see what's
coming.

Ok, so maybe what's coming ain't so hot, but here's a bit of survival technique.  Suddenly, all three poems come into stark relief; what they have in common is a point of convergence from which we can learn quite a lot.

What might that be?  The thread running through all three pieces is not fatalism or misanthropy or even old school Darwinism.  What we have here is a heightened, unsentimental perception of the human psyche, with all its warts, foibles, and limitations.

Is "Reading Tea Leaves" the answer - it would seem that the very title isn't holding out any unadulterated hope.  But seeing patterns seems to be a help, be they in tea leaves or herds or a certain something lacking.

There are 30 of these little bon mots here, ready to pop in your metaphoric gullet, tasty as all get out, but there's a caution.  Chew well; chew very well, indeed, if digestion is your intent.  Reflux can be a nasty condition.


Lilliput Review #141 was originally published in January 2005.  Today's featured poem comes from that issue.   For 6 more poems from the same issue, check out these two posts.  Enjoy.


train
toward home
fog
on both sides
of the bridge

I'm afraid I see too much of myself in "lacking."

We are all in that boat and, it seems, we forgot the oars ...

Well, well, these three poems are not like "The Blur". Very interesting. Anyone recall "The Blur"? Wonderful of you to feature John Bennett in a post - an electric mind.

Hey, Jeffrey, thanks for the note and glad you liked the post. I am not familiar with "The Blur" but I see it out there commented on the web. John just sent me another cd and book, which I'm looking forward to.
Don