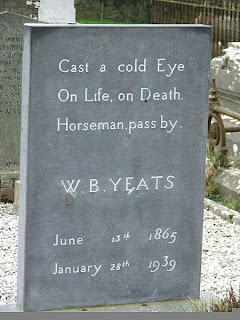 This week's selection for Issa's Sunday Service is "Yeats's Grave" by The Cranberries.  I'm not sure where I ran across this one but it is a fine example of LitRock.

The lyrics quote directly from a Yeats's poem and, as such, are actually worth a look see:


Silenced by death in the grave
W B Yeats couldn't save
Why did you stand here
Were you sickened in time
But I know by now
Why did you sit here?
In the grave

Why should I blame her,
that she filled my days
With misery or that she would of late
Have taught to ignorant men most violent ways
Or hurled the little streets upon the grave
Had they but courage
Equal to desire

And you are writing down everything
But I know by now
Why did you sit here
In the grave...

The second verse of "Yeats's Grave" is a quotation from "No Second Troy," which follows:


Why should I blame her that she filled my days
With misery, or that she would of late
Have taught to ignorant men most violent ways,
Or hurled the little streets upon the great.
Had they but courage equal to desire?
What could have made her peaceful with a mind
That nobleness made simple as a fire,
With beauty like a tightened bow, a kind
That is not natural in an age like this,
Being high and solitary and most stern?
Why, what could she have done, being what she is?
Was there another Troy for her to burn?

The poem deals with his former lover, Maud Gonne, an actress and Irish revolutionary.  Yeats takes issue with Gonne's revolutionary ways, comparing her classic beauty by implication to Helen of Troy, whom the Trojan War was supposedly fought over.   The last line, the last of a series of questions in the poem, asks "Was there another Troy for her to burn? and the title, "No Second Troy," supplies the answer.   Background info for the poem may be found here and here ...

When folks think of Yeats,  this rendition of "An Irish Airman Foresees His Death" by Shane McGowan and the Cafe Orchestra sometimes comes to mind, especially for the musically inclined:


For no particular reason at all having to do with Yeats, here is a stunning version of Dominic Behan's "The Auld Triangle" (written for his brother, Brendan) by Luke Kelly and a couple of his Dubliner band mates:

Finally, to get back to Mr. Yeats, here's himself, reading his work:

This week's poem gives the dirt a little turn to see what it is we are about in the northern temperate climate these days.  Originally published in Lilliput Review #103, back in another century (April 1999), it has the lasting power of, well, a world.  Enjoy.

and feel
the world
crack open

the cure for
this raucous world...
late cherry blossoms


PS  Get 2 free issues     Get 2 more free issues     Lillie poem archive
Send a single haiku for the Wednesday Haiku feature.  Here's how.
Go to the LitRock web site for a list of all 95 songs
Hear 'em all at once on the the LitRock Jukebox
Subscribe to Lilliput Review

Email ThisBlogThis!Share to TwitterShare to FacebookShare to Pinterest
Labels: Cranberries (The), No Second Troy, W. B. Yeats

It's raining hard this morning in Iowa and all the rivers and streams are coursing with snowmelt. A very good quiet morning to listen to the Cranberries and W.B. Yeats - a delightful post. The Cranberries' Yeats interpretation is cool. I'm not certain, but I think these Yeats' readings might be most of his extant recordings. The old BBC didn't save much.

Scott Watson's journals are very moving to say the least.

I enjoyed the Cranberries but nothing tops Yeats reading Yeats. The amazing thing is that he seemed to talk the way he reads poetry. If I didn't know the Innisfree poem myself I wouldn't be able to tell his intro. from the poem.

Have a great day!

Glad you liked this one. Just formatting part 3 of Scott's journal for tomorrow.

Funny how addresses the fact of his (literal) poetic voice before plunging in. I would imagine the mic might have given him a sense of the timelessness of the situation.

I didn't think I would like that but I did.

Good to hear, Scott. I believe I had a sort of preconception of the Cranberries myself.