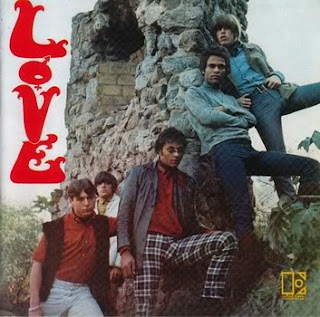 This week's selection for Issa's Sunday Service comes from one of my favorite 60s bands: Love.  The literary allusion is brief, (the mention of "poetry") with the cut being a smart, if lightweight (especially compared to their later work), pop song.  It does highlight the rocking side of a band that became famous for a more mellow folk/chamber rock vibe, best exemplified by one of the finest classic rock albums ever, Forever Changes.

Not long after recording that album, Arthur Lee, the charismatic leader and songwriter of the band, fired everyone and started a long, checkered career with backup bands and material that never rose to the quality of his previous work.   Lee's spiraling descent hit a low point when he was sentenced to 6 to 12 years in jail i prison in 1996, the details of which may be found here.

Lee's sentence was shortened when the original trial proved tainted and he was released. What followed was an amazing coda to his story; Lee put together a new assembly of musicians, went out on the road and performed a stellar version of the Forever Changes album live, which is available in both CD and DVD editions. If you are a fan, it is not to be missed. What follows via youtube are two cuts from that tour and the Forever Changes album, performed live on Later with Jools Holland. It seemed that just as quickly as he had returned, he was gone, this time for good.

You Set the Scene

Between Clark and Hillsdale

It would seem that issue #106 of Lilliput Review had some amazing poems, some of which have been featured here and here and here.  So, adding to those 9, here are 10 and 11: LeRoy Gorman reminding us of a classic haiku concerning the octopus dream by Bashō and Marshall Hryciun just reminding us.

PS  Get 2 free issues     Get 2 more free issues     Lillie poem archive
Send a single haiku for the Wednesday Haiku feature.  Here's how.
Go to the LitRock web site for a list of all 92 songs
Hear 'em all at once on the the LitRock Jukebox
Subscribe to Lilliput Review

Enjoyed the morning tunes. If only Sunday Services growing up were half as hip and entertaining. Thanks for my intro to Arthur Lee.

Glad you liked. If you have never heard the Forever Changes album, do. You can listen through the grooveshark link I've provided. Don't know if you need an account but it's free.

You will be amazed.

Don: That very album sits in my old vinyl record bin. I didn't know the saga of Mr. Lee, though. I guess I'll dust off the record and see what else is on there.

Yeah, Jim, it's a rocker, I'm listening to it right now. Got rock, pop, folk/rock, even a bit of early garage and yet it all blends into a cohesive sound.

The cover I put up is from there first album, which is excellent - Stephanie Knows is from the second album, Da Capo, which is also, in large part, very good. There is a 16 minute cut that takes up the 2nd side which really isn't interesting enough to sustain a full listening but would have made a good four or five minute piece.

I'm not sure how I missed this one. I don't ever remember hearing it before.

Perfectly understandable ... it was a long time ago, they never had a hit single, and classic rock radio plays the same 100 albums over and over ... that is, when there is even a classic rock station around.

Hope you like some of their other stuff, too.