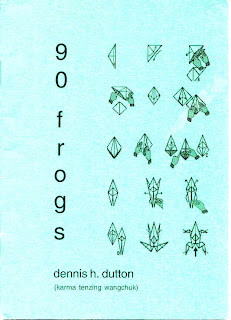 The copy, pictured above, is actually the second edition of 90 Frogs by karma tenzing wangchuk, published as the first chapbook in Stanford Forrester's bottle rockets chapbook series.  Stanford provides a wonderful introduction on the composition of the original edition, which was produced by tenzing in 4 days for his mother's 90th birthday.  Not only did he present her the book but on the train on the way to visit her, tenzing made 90 origami frogs and wrote one poem on each to present to his mother on his arrival.

There are any number of the poems in this collection which show the influence of the ever compassionate Issa.   Particularly when the poems directly address life forms, as with this "little frog" above, they have that timbre.


summer heat
a fly relaxing
on a frog's back


The ironical juxtaposition here of two natural "enemies" is delightful to all, except perhaps the frog.


the tree frog's
tiny toes
touched by the dawn


Time and again, tenzing's power of minute observation evinces itself, powerfully juxtaposed by the extreme minimalist of description.  What feels most impressive to me about these poems is their timeless quality; truly, as well done as they are, they could have been written by one of classic masters.


one moon
one pond
one frog


The poet here seems to tip his hat to all the possibilities of the situation, including Bashō's.


sitting patiently
without a thought
the frog


This poem nicely posits a response to critics of the anthropomorphic strain found in Issa's work, which also appears in some of the tenzing's poems in this collection.  Lighten up and laugh, folks, knowing full well what you (don't) know.


Somehow, we feel the weight, light as it is.  And see it, too.  Truly, there is so little to say about tenzing's poems that they don't already more succinctly and more powerfully say on their own.  I'm just going to get out of the way of the next two:


back and forth
over the lake
two frogs


mrs. frog
I was once
a tadpole myself

Try this one on for size:


Having just attended a haiku festival, I can tell you there is a lot of hopping around onstage.  This, however, is another timeless haiku; literal, it may be, and figurative it definitively is


frog chorus
none of the voices
out of tune


This poem shares a kinship with "waiting patiently," above - it is simple, wonderful truth


Here is a moment perfectly captured.  The silence can be heard.


all those frogs
not one
with a cell phone

Finally, three more which all, in one way or another, look back on their ancient precursor:


jumping in
the frog deepens
the silence

the frog
jumps over
the moon

the biggest splash
of them all
Basho's

This volume, of which this is just a small selection, is truly a classic of our time.  It is so rich, so resonate, and so spot-on it really is hard to believe that it has slipped out of print for a second time.  tenzing informs me that, down the line a ways, there is a possibility of another reprint.

In my view, it can't be soon enough.


This week's selection from the Lilliput archive comes from #170, July 2009 and it is a powerful monostitich by the fine poet Grant Hackett.  Enjoy.


Each step into simplicity :: undoes the weave

he likes the grass
of my umbrella-hat...
flitting firefly

We have a lot of frogs around our place. AFter a rain they make a cacophany. I really like them. 90 frogs is a great title.

I can also hear Aristophanes ("The Frogs", 405 B.C.E ) smiling at tenzing's creation & tenzing smiling back.

I've lived with these poems, this great little book for almost a decade. Always fresh, leaping, and — as you remind us in this wonderful review — still.

i appreciate your insight coupled with the samples, Don.

Great point, Donna ... so happy you got to enjoy these again.

Wrick, you are really making my week!

cloudhand, so very true about shelter/street by tenzing. In fact, you can read my take on it in this previous post:

&
just maybe re:produce it as it was originally (physically) done ?

and with that de-lightful colored "Olde Pond Book Club"

comix attached to the back cover?

one of the many that I like/appreciate:

meditating
if it's not the crickets
it's the frogs

you can drop in to
this Olde Frog's Pond
any time

just bring your own bugs/munchies

I especially enjoy the poem where the frogs have no cell phones! If only people would follow suit.

Yes, Paula, that one jumps out in a book of what might be described as traditional almost classic haiku.

love the thought of 11 frogs hopping on stage.....cute

Yes, in the mind's eye very easily visualized ... be it human or the more common pond variety.