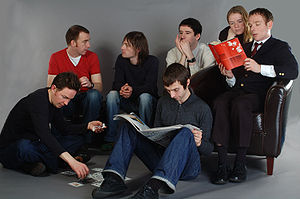 This has got to be the only song (and I know as I type this someone will find another ... or write one on the spot) that mentions both Judy Blume and Jack Kerouac together . Indie darlings Belle & Sebastian have their way with modern culture; throw some J. D. Salinger in the mix and you're good to go. The title is a bit of a thunk for those terminally French challenged and, in fact, for those not. Go figure, it seems to be implying.

Municipal pool, you're a junior life saver
But you're friends are all serious ravers
Le Pastie de la Bourgeoisie
Reading Judy Blume
But you came too soon

You're too tall, much too tall for a boyfriend
They run and hide, from your buck tooth and split ends
Don't be scared, like the books you've read
You're the heroine
You'll be doing fine

Wouldn't you like to get away?
Bestowing the memory of good and evil
On the ones you left behind
The heartless swine

And you love like nobody around you
How you love, and a halo surrounds you
Le Pastie de la Bourgeoisie
In the Autumn cool
Say cheerio to school

Listen Dear, I've been watching you lately
If I said all these things you would hate me
Le Pastie de la Bourgeoisie
At the church bazaar
I nearly went too far

Wouldn't you like to get away?
Give yourself up to the allure of
Catcher In The Rye
The future's swathed in Stars and Stripes

Wouldn't you like to get away?
Kerouac's beckoning with open arms,
And open roads of eucalyptus
Westward bound


However it shakes down, it's catchy as all get out and drops enough names to keep everyone on tip-toe.

Here's a fine live version from the Lowlands Festival in 2006:

This week's selection from the Lilliput Review archive comes from issue #77, way back in March of 1996. Enjoy.

If I had to choose
just one name
to give a girl child,
it would be Mary,
placing her at
the center of all sorrow
which is to say
where all hope waits.

blume and Kerouac together! Whoa.