I don't think we've had too many real blockbuster songs on the Sunday Service, but "Don't Fear the Reaper" definitely fits the bill. It's literary connections with Stephen King are well documented. So iconic is it that, until I heard it again recently (it tends to pop up on summer rock radio), I'd forgotten about the "Romeo and Juliet" allusion, which is what puts it square in the sights of the this ongoing series.

A song essentially about how love conquers death and written by Blue Oyster Cult's lead guitarist, Buck Dharma (Donald Roeser), the opening 5 lines should be of interest to those familiar with Eastern verse:

All our times have come
Here but now they're gone
Seasons don't fear the reaper
Nor do the wind, the sun or the rain
We can be like they are

That's a sentiment that even the classic haiku masters wouldn't argue with and the chord struck here might be universal enough to explain the song's initial success and persistent staying power. "Romeo and Juliet," it turns out not surprisingly, is one of the most persistent allusion in rock: this is the 4th song in the list that refers to it (&amp; there are more to come, I'm sure - suggest one and get the two current issues of Lilliput Review free) - here and here and here are the previous three.

So as not to give short shrift to the original, here is a fine excerpt of one of the best, most popular versions of the play ever produced. The intensity of Zefferilli's two young actors captures it all:


This week's selection from the Lilliput archive #76, way back in the land of January 1996. Alan Catlin is something of a master poet, here singing of another master of art.

Hokusai
sketches the whole
of the earth
emerging from the sky.


mountain's red leaves
the setting sun returns
to the sky 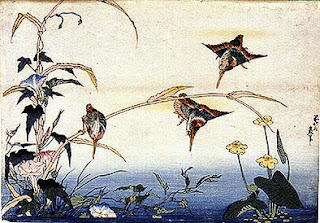 LIke that song a lot. I remember when it came out. I couldn't even imagine it was by BOC. It sounded so different from everything they'd done until then.