Above you will see a fine drawing (plus conference badge) by the wonderful Ruth Yarrow which exemplifies in my mind the generous spirit of the participants at the 2011 Haiku North America Conference in Seattle.  Thanks, Ruth, for a fine likeness.

Being in Seattle for a week is the reason I've been keeping a low profile on the blog and elsewhere; I had done a few posts ahead, but was nowhere as together as my fellow haiku blogging panelists Melissa Allen, Gene Myers, and Fay Ayogi, at least two of whom were posting live from the conference (while I and my 10 thumbs were wrestling with a small HP notebook).

And a little closer view of the panel on haiku blogging:


In addition to the haiku blogging panel, I participated on a panel called "Developing Haiku Book Manuscripts" with some serious heavyweights in small press haiku publishing: Jim Kacian, Ce Rosenow, and Charlie Trumbull.

The perspective I added to both panels was the POV of a micropress publisher.  As a one person operation, everything, including blogging and manuscript development, is seen through the other end of the telescope.  I'm not sure how helpful that was for the audiences at both sessions but I can say I learned from my fellow panelists.

There was a nice balance between the practical and what might be termed the academic.  Even on the later end of things, Richard Gilbert in the conference's most scholarly presentation ("Social Consciousness and the Poet's Stance in 21st Century" - the 1st William J. Higginson Memorial Lecture) was so well grounded in the history and tenets of haiku, as well as the sensibility of the Jack Kerouac School of Disembodied Poetics at Naropa where he studied, that one never got lost in the morass of ephemera.   He was engaging, knowledgeable, and obviously an all round good guy.

There were so many excellent panels and presentations that there were the usual conference schedule conflicts (an embarrassment of goodness) and I wasn't able to attend some I would have liked to.  Highlights that I was able to catch included Jim Kacian on the history of the one-line haiku ("Monophilia"), Cor van den Heuvel's powerful reading from his new book, A Boy's Seasons: Haibun Memoirs,  Carlos "The King" Colon on concrete haiku and poetry, and Eve Luckring's phantasmagorical video renku (with a tip of the hat to Sergei Eisenstein and the avant garde).  Day 3 was packed with great presentations: the year's memorial reading for those who died by Marjorie Buettner was memorable, and Daivd Lanoue's "Frogs and Poets" on Issa was my favorite of the conference, balancing as it did whimsy and scholarship in just the right proportion. The final day also saw Paul Miller give a provocative talk on Gendai (modern) Haiku in the West and the delightful "Old Pond Haiku Comics" by Jessica Tremblay (whose weekly postings I will be following with great interest) was just the perfect way to cap things.

I was sorry to miss Charles Trumbull's "History of American Haiku" and Penny Harter's session on haibun, the later because of a conflict and the former because we had to be up at 3 am for the return flight.  Between the two panels I was on and the various sessions I attended, I also gave two brief readings (one open and one for poets with new haiku books) and helped judge a kukai contest among participants along with Carmen Sterba.

Lots to think about, lots to absorb, and lots to just plain enjoy.  In off time, I traipsed about Seattle with my mate and friends, hitting the bookstores, restaurants, museums and bars and having an overall great time.  I'd like to particularly thank Michael Dylan Welch, Tanya McDonald, and Tracy Koretsky for their kindness and organizational acumen, along with Susan Diridoni, Gene Myers, Melissa Allen and Cherie Hunter Day for variously pleasant conversations, lunch, and camaraderie.

Finally, for those of you who didn't get to delight in this particular piece of cheese (on Facebook), well, here you go: 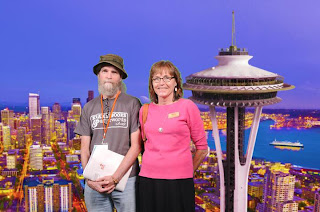 
All of This, and Being Too


Flowering now of now, splayed flat
by winds of specificity,

what comes forth in this blossomed
gust is not regret, not sorrow.

What comes forth when the battered
leaves of nakedness curl downward,

flowering now of now, is you,
is your steady, petalled comingness.


with one gust
it becomes the perfect
willow

Send a single haiku for the Wednesday Haiku feature.  Here's how.

Thanks for the note ... I did have an enlightening time and your proxy plus frogs was very enjoyable, too. Stay tuned on that front.

Thank you for mentioning my website, Don. I had such a great time at the conference.

The website for Old Pond Comics has changed and is now located at http://www.oldpondcomics.com/

My new blog is at http://oldpondcomics.wordpress.com
You can subscribe to the blog to receive daily comics by e-mail.

Jessica, thanks so much for the update ... I'm heading off to subscribe now ... Don