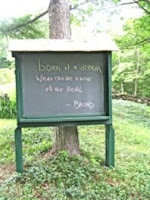 Bob Arnold, one of the creative forces behind Longhouse Publications and an occasional Lilliput poet, has published on his website a project he calls Back Road Chalkies, the first of which is pictured above. I'll let him explain:

With chalk in hand, Back Road Chalkies is a landscape anthology I selected and gathered up over one year from 2007-2008. The chalkboard stanchion took a day to build and move on a wheelbarrow to its perch. Built from old lumber I took apart from an outdoor bookstall I had designed years earlier. The chalkboard was bought from a family of home schoolers for $5. The father of the brood asked, ‘What are you going to do with that?’ I said to drive by the house sometime and take a look. Maybe he has. All our neighbors have, but only two who liked to move on-foot ever said a word about it — smiled and said they looked forward to it. For awhile I was chalking up poems or sayings once a day, once a week, every few weeks, and over the long winter maybe just Thoreau would hold the fort. Jack London soon with him. A friend might write and tuck in a poem of their own and I’d share it immediately, or something in the world called for a line or two on the chalkboard, or the season asked for a poem, or the slant of light. Some of my own poems I just left unsigned, floating in the breeze. Nothing was planned, the day lay ahead. A poet visited and we welcomed him into a photograph with a lone, sturdy line of his poem already on the board. Then came some puppets, followed by a turtle. Maybe a dozen vehicles passed by on a winter day, double that for summer — neighbors, joggers, septic truck, log truck, plow, grader, tractor, one old farmer with an ATV, bicyclists, scooter, UPS, Fed Ex, convertible, horse & rider. Susan Arnold often took the photographs. And the tall and graceful tamarack I planted 35 years ago provided all the shade.

What you'll find here in this pdf document is 75 delightful pages, put together as described above as only Bob Arnold can. And for those who have been following the ongoing Basho posts here, the nod in Bob's title (as well as the first chalkie) is clear. Thanks once again to Ron Silliman for pointing it out.

This is a perfect example of why I love the net.

Here is a transcription of the above photo, in case the prints too small.

born of a dream
What can we know
of the real


Hope you enjoy it.

What a great idea! Sounds like loads of fun.

Charles, yes, indeed, poetry and aphorism for the neighbors - it is a great idea. I read them all and Bob's taste is impeccable.

I always think chickens when I think something is the opposite, is peccable.