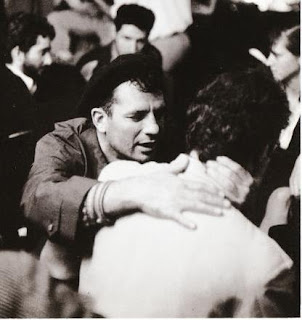 Both Ubuweb and Google videos have got the famous loopy/goofy Jack Kerouac film, Pull My Daisy, for viewing. Here's the Wikipedia description that accompanies the film:

Based on an incident in the life of Neal Cassady and his wife Carolyn, Daisy tells the story of a railway brakeman whose painter wife invites a respectable bishop over for dinner. However, the brakeman's bohemian friends crash the party, with comic results.

The Beat philosophy emphasized spontaneity, and the film conveyed the quality of having been thrown together or even improvised. Pull My Daisy was accordingly praised for years as an improvisational masterpiece, until Leslie revealed in a November 28, 1968 article in the Village Voice that the film was actually carefully planned, rehearsed, and directed by him and Frank, who shot the film on a professionally lit studio set.

Pull My Daisy has been deemed "culturally significant" by the United States Library of Congress and selected for preservation in the National Film Registry.

Here's the film in its entirety:

For me, this sounds much better than it appears. When you isolate the soundtrack, the improv/performance element of it is actually pretty amazing. If this legendary film actually lives up to its reputation, it is Kerouac's performance, unseen, that is the reason. It is interesting to see a young Corso and Ginsberg and all the others, but Jack is the only one who is actually acting.

The David Amram score is also quite good.

Speaking of sound, here's a public radio program entitled "Jazz and Jack Kerouac," from the program Night Lights, originally broadcast on WFIU Public Radio. There is some good work here, though there have been many stories on how some of the jazz guys, particularly in the "American Haiku" session (Al Cohn and Zoot Sims), were merely perfunctory and treated Kerouac with an indifference that shattered his dreams of a great blowing session. Here's David Perry's comments from the linear notes to The Jack Kerouac Collection:

Sims and Cohn, (Bob) Thiele (the producer) explains, thought of it as just another record date. Didn't even listen to him. Probably went out and got drunk. The incident also shows the vulnerable side behind the brawny voice. "When I found him, he was in a corner crying," says Thiele. "And he said, 'My two favorite musicians walked out on me. They didn't even want to hear this back.'"

In those days the typical thing was, the date's over and we'll see ya. These guys would head for the local pub. They could have been recording with Ellington or Benny Goodman and they still would've done the same thing.

This story somehow encapsulates the tragedy that was Kerouac; heartbroken by his jazz idols, yet misunderstanding that it wasn't personal, really to them it was nothing at all. Still, they weren't impressed and though Kerouac's understanding of jazz was deep, it's application to literature was more metaphoric than actual. For the jazz guys, it was non-existent. For them it was two different languages. It didn't translate. They didn't get it.

They didn't get it all.

i've never heard of "pull my daisy" before... i'm gonna watch it as soon as i get on a computer with speakers.

kerouac seems to be one of the most interesting characters in the last half-century or so. it always seems there's another side of him popping up.