James Wright: A Prayer To Escape From The Market Place 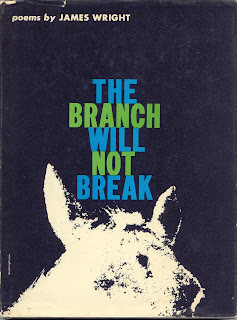 The Branch Will Not Break by James Wright is one of the greatest volumes of poetry of the twentieth century. This was brought home to me again as I perused Wright's Selected Poems for a review I'm preparing of a new collection of poems in his memory. Some of the poems simply jump off the page and throttle, all the more amazing since they askew the easy modern method of engagement that is direct address, which many a modern poet uses like cheap whiskey to get there fast, only truly arriving the following morning.

Here is the first poem of a few I hope to feature in the coming weeks.

A Prayer To Escape From The Market Place

I renounce the blindness of the magazines.
I want to lie down under a tree.
This is the only duty that is not death.
This is the everlasting happiness
Of small winds.
Suddenly,
A pheasant flutters, and I turn
Only to see him vanishing at the damp edge
Of the road.

Notice the haiku-like, epiphanic moment, beginning "Suddenly ...," which echoes a similar moment at the conclusion of perhaps the most famous poem from The Branch Will Not Break, "A Blessing":

Suddenly I realize
That if I stepped out of my body I would break
into blossom.


And, yes, we do know what type of magazines he was referring to, eh?


PS While typing this I discovered by serendipity that last week was the anniversary of Wright's birthday.
Posted by Issa's Untidy Hut at 6:20 AM

Email ThisBlogThis!Share to TwitterShare to FacebookShare to Pinterest
Labels: Branch Will Not Break (The), James Wright, Near Perfect Books of Poetry

I just added the book to my Wish List at Powell's. I love both of these poems...thank you.

I've read and enjoyed quite a bit of WRight's poetry but I don't have this book. Gonna have to look for it.

Lisa, rarely do I go out on a limb, but you won't be disappointed ...

Charles, this is the Wright volume to have.

Ed, the link in the original post is to the entire poem, A Blessing.

The other poem you are thinking about is Lying in a Hammock at William Duffy's Farm in Pine Island, Minnesota, which ends "I have wasted my life:" I plan on posting it in its entirety sometime soon.

This is the book that made me want to be a poet. Just seeing that cover gives me shivers.

Yes, this may be the one poetry book, certainly of the 2nd half of the 20th century.

What you probably meant to say is that this is the book that made you want to be yourself.

Wright's tendency to speak in terms of transcendence informs nearly all his middle and late work. He wants so badly to "be" on the other side of death, rather than just in a state of longing and fear.

I like the one about seeing an ant's shadow on a fence rail.

You have precisely nailed it. The ant shadow poem is on a previous post (for those who missed it):

Suddenly I realize
That if I stepped out of my body I would break
into blossom. This is not by James Wright


This is a haiku of ISSA's.

now that the private has be
-come the public
have "we-all" merely become
how we behave?

we run the risk of
becoming what we pretend
o be..

Anon, is this the 'rode' at the fork that "we" want to take?

HEY SOMEBODY IS POSTING AS ME!!!

I DON"T FUCKING USE THAT PHOTO!!!
AM THE ONE WITH THE BEARD

THAT PHOTO WAS TAKEN ABOUT !) YEARS AGO BY MY DAUGHTER!!

ALSO NOTICE THAT EVERY WORD IS CORRECTLY SPELLED and every sentence is 'straightahead' ?

anybody 'out there' wanna communicate with me..

E MAIL ME. cal me on the phone or

I have NEVER read this book OR this poem

my previous reply did not go through

whAt the fuck is going on

I have NEVER read this Wright poem

and
have neveer done much more that glance at his "stuff"
nor do I use that photo.

I best start, in this, my olde age,
smoking
some "good" shit..

I STILL SAY and firmly
that "that ain't me!"

now that things are cleared up clearity thy name is sanct
and
I am re:leived to find out that I am, and was,
snae... sane as rein in Spain!

maybe I should call a doctore?
go in for my &0-year-old check up?
change the oil?
lubricate the gears"

BOY, this net sure is phun.
thanks Don
and

what SHOULD we call this novel:

"The World According to Eddie Baker"

I am leaning towards:

The Confessions of an Old Phart"

HEY those posts with my old photo are now gonwe..
noboddhi gonna know what the hell I'm talking about...
no real context!

is this
an haiku moment
or what

It's amazing how this stuff stays up on the net forever. Well, now its supposedly gone forever.

which just last night led me
to Howard Nemerov's piece:
To Lu Chi

then I moved over to (in same volume) his:
Absent-Minded Professor

should have read & paid attention to his works...

pee est. just came across the word new to me:
"netequette"

is there a book on't?

Ed, of course there is, right here:

I thought and yes, sometimes I DO
think...for myself

that this neteket "stuff" was well
a joke or a ploy
of some sortz!

imagine.. teaching kndergarten kids how to cruise the net...

whow gonna need Playboy Magazine
when they got a farm in France!

and NOW
the Pentagon/NSA is gonna
"protect us?

and
who the hell is Ben Quayle?
what's his name's strupid
son getting in to....

I bet that this guy can't sprl nothing... either.

Netequeete I gotta chck out one of these manuals;;;;