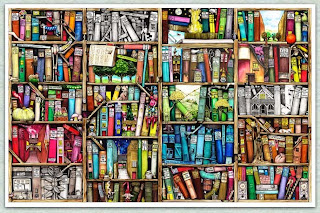 
The Door by Margaret Atwood

On Love and Barley: the Haiku of Basho, translated by Lucien Stryk

Shattered Sonnets, Love Cards, and Other Off and Back Handed Importunities, by Olena Kalytiak Davis

One Secret Thing by Sharon Olds

Above is a list of the top five poetry books I read in 2008, culled from a list about 8 times the size. Only 1 of the 5 were published in 2008, but that's really not surprising, at least to me. The Basho title is an obvious offshoot from the Basho Haiku Challenge, instituted here this year. And the Mary Oliver title comes from my research for the 3 Poems Discussion group I moderate at work. The complete Emily Dickinson would have made this list if I'd finished it instead of hunting and pecking my way through. A book called West Wind by Oliver, which I'm currently reading, most certainly would have been in the running as it may be her best print collection I've read so far. The audio book At Blackwater Pond, which I listened to since there is no companion print volume, is in fact her best collection overall. It was particularly interesting to me that the poems she selected from various volumes were not necessarily included in either of her collections of selected poems, sending the message that perhaps she might have selected differently if she'd had her druthers (or maybe she just changed her mind). I probably should say I read quite a few Basho and Oliver titles that did not make the list.

The Sharon Olds' title made it on the strength of its final third. The poems that open the collection are not quite up to her usual excellent standards but the poems in the final section, dealing with her mother's death, have the devastating power of her very best work.

So much good poetry, so little time.

Dear Don,
Happy New Year and I hope to find your best of collection in my local library or book-store so that I may enjoy them, too.

happy new year! great list, the only one i've read so far is "love & barley."