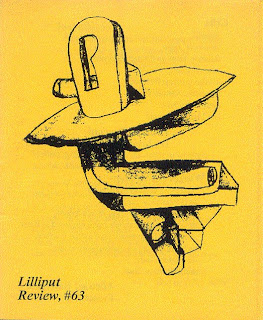 In Monday's post, I mentioned James Wright's groundbreaking collection, The Branch Will Not Break. Intrepid correspondent Ed Baker remembered the ending of another powerful poem from that collection. Here it is in its entirety:

As evidenced in Ed's memory of this last line, the power of the poem is hard to underestimate. Perhaps that power has been slightly diminished via much imitation; still, I am bowled over every time I read it. The precision in execution, the attention to detail, and, perhaps, the allusion in the first line to Chuang Tzu's (Zhuangzi) famous

Whether the allusion is there or no (just a dream of mine, perhaps), the general flavor of Eastern work permeates The Branch Will Not Break. I've been revisiting this volume on and off all year and reading the Selected Poems sent me back again. No matter how many times I return, the well continues to be plenteous.

Many thanks to the Poet Hound for her take on issue #165 of Lilliput Review. Sidle on over: she features poems by Greg Watson, David Chorlton, and John Martone.

Curtis, over at Blogging Along Tobacco Road, has mounted a YouTube video of Kerouac reading some of his haikus. In case you haven't seen it (or I should say heard, since it's a YouTube vid with a single picture fronting the audio - close your eyes and think "YouSpeaker"), here it is:

In addition, Curtis has been featuring videos he is making of poets reading haiku, as with the one by Roberta Beary posted here recently. This calls for some more sidling to see his vid of Charlie Smith and other goodies. With Curtis's permission, I'm also posting it here:

Ron Silliman has pointed to an interview by Doug Holder of the prolific poet, critic, reviewer, and small press legend, Hugh Fox that might be of interest to folks. Hugh has published the occasional poem here and is author of the Lilliput broadside, "Slides," which was issue #112. Here's a link to the old Lilliput blog (beware, pop-up zone), "Beneath Cherry Blossoms," with some sample poems from that broadside.

This week's featured back issue of Lilliput Review is #63, from December 1994. Be sure to check the Back Issue Archive, where you can find sample poems from 75 back issues. Enjoy.

Cause links one
Reason to another,
And at the end
Of the chain
Sits a stark
And elemental is.

Sentence (from a sequence)

Too painfully large for word
or phrase, our small talents
despair of meaning, and we are
on buses tapping seat rails
unsure of the stop for today,
pausing as fingers glide
along reflective chrome
streaked by syllables
of familiar streets.

Behold
this snow: light
fallen to show us through darkness
toward spring. Please
lift this sighting forward
on worthy words. I
don't know how.
But I believe in you.


The constant wavesound,
the chant,
slow-grinding thought and bone
to sand

Four boys
found a glass doorknob on the beach.
They called it The Knobadoor Diamond
and it made them rich.

Pine Island is about 30 miles from here. I've driven through there many times on the way to and from Rochester. I'm not sure there is an island or, if there is, whether it has pines on it. But that doesn't really matter. The poem is amazing. I view the last line as celebratory.

(just) go-to Hinton's 'Chuang Tzu the inner chapters'
and read about carpenter Riprap( and many other 'things'!

then go to The Essential Chung Tzu (Hamill/Seaton) and

That Wright poem is like a very fine micro fiction, a story as well as a poem. Love the luminescent prose, juxtapositioned with that killer last line.

It is an amazing poem ... I guess that would be celebratory in the large sense. Revelation it also is.

Ah, Ed, right to the heart of the matter, as always!

Charles, interesting take, not the prose poem but the term proem here might do it, a term I've never really warmed to for the prose poem, but a poem that uses the conventions of fiction - yeah, proem might do it.