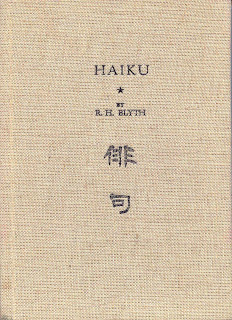 Last night I wandered from my previously stated purpose of mining R. H. Blyth for more Shiki translations and sat down with the 1st volume of R. H. Blyth's 4 volume Haiku, opening it up to the preface and beginning to read. I was positively knocked out; it is, simply, transcendent. I've plumbed these 4 volumes over the years for many of the hundreds and hundreds of poems by acknowledged Japanese masters of the haiku, by poet and by season (the later being the general schema of the volumes). Let me let Blyth speak for himself:

The history of mankind, as a history of the human spirit, may be thought of as consisting of two elements: an escape from this world to another; and a return to it. Chronologically speaking, these two movements, the rise and fall, represent the whole of human history; and the two take place microcosmically many times in peoples and nations. But they may be thought of as taking place simultaneously or rather, beyond time, and then they form an ontological description of human nature.

-----There seems to me no necessity, however, to make a Spenglerian attempt to show from historical examples how there has been a movement towards ideas, ideas, abstractions; and a corresponding revulsion from them. In our own individual lives, and in the larger movements of the human spirit these two contradictory tendencies are more or less visible always, everywhere. There is a quite noticeable flow towards religion in the early world, and in the early life of almost every person,-and a later ebb from it, using the word "religion" here in the sense of a means of escape from this life.

-----The Japanese, by an accident of geography, and because of something in their national character, took part in the developments of this "return to nature," which in the Far East began (to give them a local habitation and a name) with Enô, the 6th Chinese Patriarch of Zen, 637-713 A. D. The Chinese, again because of their geography perhaps, have always had a strong tendency in poetry and philosophy towards the vast and vague, the general and sententious. It was left, therefore, to the Japanese to undertake this "return to things" in haiku, but it must be clearly understood that what we return to is never the same as what we once left, for we have ourselves changed in the meantime. So we go back to the old savage animism, and superstition, and common life of man and spirits and trees and stones,-and yet there is a difference. Things have taken on something of the tenuous nature of the abstractions they turned into. Again, spring and autumn, for example, non-existant, arbitrary distinctions, have attained a body and palpability they never before had. We also, we are the things,-and yet we are ourselves, in a perpetual limbo of heaven and hell.

-----It was necessary for us to prostrate ourselves before the Buddha, to spend nine long years wall-gazing, to be born in the Western Paradise. But now, no more. Now we have to come back from Nirvana to this world, the only one. We have to live, not with Christ in glory, but with Jesus and his mother and father and brothers and sisters. We return to the friends of our childhood, the rain on the window-pane; the long silent roads of night, the waves of the shore that never cease to fall; the moon, so near and yet so far; all the sensations of texture, timbre, weight and shape, those precious treasures and inexhaustible riches of every-day life.

-----Haiku may well seem at first sight a poor substitute for the glowing visions of Heaven and Paradise seen of pale-lipped asceties. As Arnold says:

Haiku have a simplicity that is deceptive both with regard to their depth of content and to their origins, and it is the aim of this and succeeding volumes to show that haiku require our purest and most profound spiritual appreciation, for they represent a whole world, the Eastern World, of religious and poetic experience. Haiku is the final flower of all Eastern culture; it is also a way of living.

There are some deep, even ticklish and, occasionally, seemingly nonsensical waters to navigate here. Be that as it may, my thought is sit at the feet of a master and learn. If there is anyway for someone from the West to understand what haiku actually means in Japanese culture, this is it. No matter whether you agree or disagree with Blyth; there is just too much here not to revel in. Admittedly, this is the beginning of a potentially long, four volume journey but I'm hoping to see it through in '09. I have a feeling I'm going to need a good deal more of pluck than lucky, but I'll just have to see. And I'll report back.

Here's a couple of poems I came across this week worth a gander:

Jane Kenyon's Taking Down the Tree

The Oliver poem is an outgrowth of all the reading I've been doing for the 3 Poems discussion group; it is a good one, really representative of all her work. If ever there was a poet constantly working and reworking the same territory, it is Mary Oliver and, despite what many critics have to say, this is just why she should be cherished. She points to nature in its myriad manifestations and takes from it a solid, spiritual, all-encompassing world view.

For more on Oliver, check out my post on Eleventh Stack dealing with her best collection, the audiobook entitled At Blackwater Pond: Mary Oliver Reads Mary Oliver.

The Kenyon poem nails what many of us will be doing over the coming days and weeks, taking down the tree. In this piece, Kenyon harkens back to the pre-Christian tradition of the solistice tree and its original purpose, something we all know and feel on an instinctual level but rarely articulate. Darkness, be damned.

Right now, I'm reading poetry volumes by Richard Brautigan, Robert Bly, and James Wright in preparation for featuring work that has been selected for the Near Perfect Books of Poetry list (183 and counting - will we make to 200?). Three poems from the Wright volume, The Branch Will Not Break, have already posted. In addition, I'm reading From the Other World: Poems in Memory of James Wright from Lost Hills Books for a future print and possibly blog review. Like so much tree tinsel, the Blyth volume has distracted me from Matsuo Basho: The Master Haiku Poet by Makoto Ueda, which I will be getting back to I hope.

If I'm not careful, I'm gonna run out of bookmarks.

This week's dip into the Lilliput archive comes from October 1994, with a nifty, if slightly faded cover by the irrepressible Wayne Hogan. Hope something grabs you here. 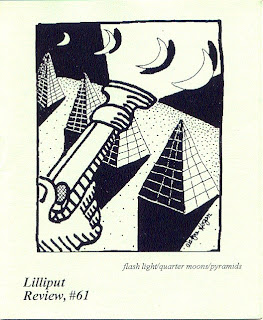 we have forgotten so much:
how afternoon light
will warm us. the
way our bodies are.
how fingers will move
into a shadow so
slight, there is
hardly room for
the world.

I watch her getting dressed.
She dips her head slowly,
her hair flops away
from the crown
in a swirling semaphore
of golden petals.
Clothes float up from the floor
like butterflies.

curls into herself,
the last leaf
on the maple
wind blown
and twitching
still holding on

¶writing is motionless
-when I am done.
-my shadow
-on the path of the path.

on my wall pinned a six X nine inch yellow sheet with (my) myriad mantras there-upon this single sheet was typed using my Underwood Upright in (((about 1999 (when I had (recently) 'dropped back in"))) and on it next to the next to last entry
Blyth's:

The secret of life consists in being always
and never serious."

then next to last from Cid:

"Let the words tell you what you should be saying."

the last 'entry' lines of mine (which, via Cid a single word (or two) was dropped or relocated which is why in the final poem I put the line in quotes):

On the swept pond
snow sets
out

simultainkneeuhtee AND as an ontology I offer


on that sheet, also , this from Buson:


"The essence of haikai is to use ordinary words and yet become seperate from the ordinary."

Ed, you are welcome ... great perspective, thanks