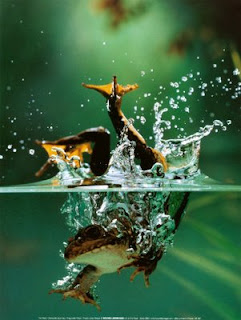 What better way to face another Friday than with infinite variations of Basho's famed frog / splash poem? Chad Sweeney has delivered 33 highly interpretative versions of the same. How else does one explain pear trees and dragons and mathematical equations from one teeny little poem?

Take a look see at his 33 "translations."

Ed Baker has supplied a few previously to this blog in the comments section of a previous post (just toggle down to see) and I have a feeling he may have a few more to share.

My favorite of Mr. Sweeney's?


And my favorite of the 30 "classic" translations? Well, I can't really decide, most of the variations are so very close. I like Sam Hamill's


And in the "slightly different" category there is Dick Bakken's


As a minimalist's minimalist publisher, how could I not love James Kirkup's 3 word extravaganza?


Finally, I would be remiss if I didn't mention the version of Ross Figgins, a poet I've had the pleasure to publish in the past in Lilliput. His version has a nice little twist (back one-and-a-half somersaults, tuck, Mr. Frog?):


old pond
a frog leaps in —
a moment after, silence 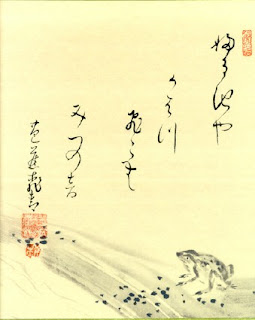 karma shaved his head
became a monk
lept into a "plash"

pretty cool to see all the translations together. thanks for sharing the link.

Pond, frog, plop, is my favorite. I guess I must be a bit of a minimalist myself.

You can use a old bean north and south poles to stick on the end
of the beds. When you are walk you will not think about all the problems that somebody have either.

An example is the Malay Annals preserved all by British Historian There Richard O.

Employee training helps you to meet the involved standard.
An effective tool company could are able to provide services
to enterprises of different sorts.

Feel free to visit my web blog wycieczki all inclusive

solar panel chargers are available in most of the electronic specialists today.


Here is my web page :: szalona-organizacja-podróży.pl