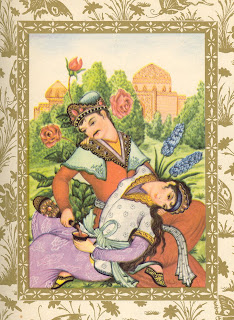 Today is the anniversary of the passing of Thelonious Monk, on February 17th, 1982, arguably the single most creative keyboard composer and player in the history of jazz. I'm not exactly sure who might argue with that: devotees of Art Tatum, Oscar Peterson, Fats Waller and a handful (or two) others no doubt.

For me, however, he's the one. Let's see - Monk on piano, Mingus on bass, Jones on drums, Ornette on alto, Trane on soprano/tenor, Miles on trumpet, composing duties shared equally - that should cover it. Away with the fantasy, however: here's the real deal.

I promised, or perhaps threatened, more highlights from the Rubáiyát of Omar Khayyám, which I was much taken with in a recent reading. Background highlights may be found in the previous post. For now, here's a thick, lyrical stew of death, booze, ennui, and love, not necessarily in that order.

Please use your hands.

And we, that now make merry in the Room
They left, and Summer dresses in new bloom,
---Ourselves must we beneath the Couch of Earth
Descend—ourselves to make a Couch—for whom?


Alright, maybe the annotating isn't quite over. Notice the words that he capitalizes. That capitalization is not largely gratuitous. Particularly, in this quatrain: Room, Summer, Couch, and Earth. And, also, what is not capitalized: we and whom.

Ah, make the most of what we may spend,
Before we, too, into the Dust descend;
---Dust into Dust, and under Dust to lie,
Sans Wine, sans Song, sans Singer, and—sans End!

Alike for those who for To-day prepare,
And those that after some To-morrow stare,
---A Muzzeín from the Tower of Darkness cries,
"Fools, your reward is neither Here nor There!"

Why, all the Saints and Sages who discuss'd
Of the Two Worlds so wisely—they are thrust
---Like foolish Prophets forth; their Words to Scorn
Are scatter'd, and their Mouths are stopt with Dust.

Myself when young did eagerly frequent
Doctor and Saint, and heard great argument
---About it and about: but evermore
Came out by the same door that I went in.

With them the seed of Wisdom did I sow,
And with mine own hand wrought to make it grow;
---And this was all the Harvest that I reap'd—
"I come like Water, and like Wind I go."

Into this Universe, and Why not knowing
Nor Whence, like Water willy-nilly flowing;
---And out of it, as Wind along the Waste,
I know not Whither, willy-nilly blowing.

Well, it seems there must be a part three, because I could go on forever, but Omar says no! Since it is a little early for a Cup of Wine (No, again!), it seems it's time to turn to the Lilliput archival selections. This week's selection comes from December 1993, 15 plus years ago. Whatever were we up to then, eh? 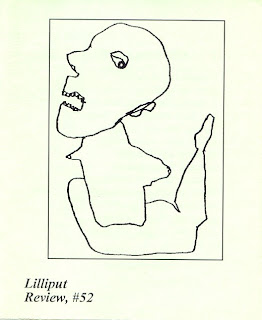 Orange breasted buddhas
test their beaks
against
the frozen earth

In A Time of Human Savagery

She breathes the flower,
eyes closed,
waiting to make her turn

Leaves open their arms
and fly wild onto the wind

Nothing can stop the world.

The player dances his keys
with pale tarantula hands.
His music moves into
the night where its staves melt
in the madness of the rain.

Finally, something of an update: I've printed the Basho Haiku Challenge chapbooks. This coming weekend, I hope to put a good dent into cutting, folding, collating, and stapling the contributors run of 50 or so. The new issues, 167 and 168, are also coming along nicely and all should begin to go out on time (well, that's a rescheduled on time) around March 1st.

And, then, perhaps daffodils.

spring begins--
sparrows at my gate
with healthy faces

I love this phrase, "a thick, lyrical stew of death, booze, ennui, and love,"

There's a poem in it's own right.

Elvin Jones on drums? Really? What about Max Roach or Art Blakey?

Also, as far as pianists go, you forgot to mention Sadik Hakim, who actually played at Monk's funeral. ;-)

Can't wait to see the Basho Challenege book! Sounds like a real winner!

Charles, thanks, I guess I should do more of my writing at 5:30 in the morning!

I confess to a weakness for Mr. Jones and, with the fantasy lineup, he seemed like the guy who could stir the pot ...

Of course, all you mention are of the same great caliber ...

Love Bill Shields' "Dead Poem." Also, M. Kei e-mailed me because he noticed I did a review on his chapbook published by you and I have now purchased another book of his and have gotten his permission to post a review once I've received and read it. Isn't that grand? Hope you are staying warm, take care Don.