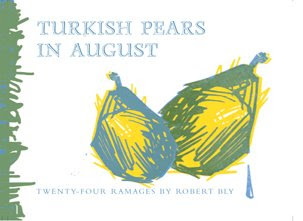 One gets the sense that in these his later years, Robert Bly is approaching his craft as a potter or a sculptor or even a mason: with his hands.

He is building poems.

This late reliance on form is intriguing and, in this case at least, its paid off, for Turkish Pears in August is one of Bly's finest works in years. Don't be mistaken: there are a few clunkers and no one can thud with such unsonorous resound as Robert Bly but, on the whole, this is fine stuff, indeed.

As you might guess, my feelings toward Bly run hot and cold. That being said, I always read him with great interest and feel he has produced some outstanding work through the years.

I should only be able to say that about more contemporary poets.

In his prefatory note, Bly explains his method and, though I have particular questions (the notion of "troubled speakers") about that method, I believe it is important to take the poet at his word and on his terms. From the preface:

A few years ago, I began to hear inside the stanza individual sounds such as in or air or ar call to each other. An er is a sort of being that cries out. What could we call a union of a consonant and a vowel? The word syllable is a ridiculous name for it; it's too Latinate and mute. These particles have more energy than the word "syllable" suggests. Hearing these cries put me into a new country of poetry. I was not hiking among ideas or images or stories, but among tiny, forceful sounds. What would happen if I adopted in or ar as the center of a poem? Decisions on content would then depend on that. I let that happen. For length, I settle on eight lines, which is larger than a couplet but smaller than a sonnet. Every poem, of course, has to have images and ideas and some sort of troubled speaker. But I began more and more to shift attention to the little mouths that cry out their own name. I eventually accepted ramage as a title for this brief poem. The word occasionally appears as the name of a movement during some French compositions for flute; it is related the the French noun for "branch." We can hear the root of that in "ramify." The tunings of these things is like tuning on horseback some sort of stringed instrument from the Urals. Each time you try to add one more of the chosen sound particles, new nouns abruptly enter the poem, and one has to deal with them.

So that's the method and it is different. I've been through the collection 3 times and it is quite good, indeed, so Bly has struck on something, at least for himself, though I wouldn't be surprised if some others tried their hands at this. For me, it is all a bit foggy despite the positive results; perhaps I'm in over my under-educated head. Of course, I do hear and see echoes of sounds units throughout, eschewing the term syllable per request. But what the final sentence in the preface brings home to me, and is important to remember, is that all of this is a negotiation between the method, the sounds produced, and the images conjured in the poet's consciousness (I'd argue unconscious but, for the moment, only parenthetically) and the negotiation twixt all these elements results in the birthing, or perhaps breaching, of a poem.

So, enough of the man-behind-the-curtain, la-dee-da. As with any properly baked item, the proof is in the tasting, so here are a few well done pieces.

Orion, that old hunter, floats among the stars
Firmly... the farms beneath his feet. How long
It takes for me to walk in grief like him.
Seventy years old, and still placing my feet
So hopefully each night on the ground.
How long it takes for me to agree to sorrow.
But that great walker follows his dogs,
Hunting all night among the disappearing stars.

The Hermit At Dawn

Early in the morning the hermit wakes, hearing
The roots of the fir tree stir beneath his floor.
Someone is there. That strength buried
In earth carries up the summer world. When
A man loves a woman, he nourishes her.
Dancers strew the lawn with the light of their feet.
When a woman loves the earth, she nourishes it.
Earth nourishes what no one can see.

Of course the exact opposite of this particular poem may be easily argued, but this is Bly's poem, so we'll let him have his point. It is his, after all.

The Watcher Of Vowels

How lovely it is to write with all these vowels:
Body, Thomas, the codfish's psalm. The gaiety
Of form comes from the labor of it playfulness.
We are drunkards who never take a drop.
We all become ditch-diggers like Brahms.
No, no, we are like that astronomer
Who watches the great sober star return
Each night to its old place in the night sky.


This is the poem about method and intent and he pulls it off nicely. Any method that evokes "the codfish's psalm," sound-wise, has my endorsement, though Billy Collins might have something to say about meaning. But meaning here is secondary, as it is so often in poetry, and I believe that is the point. It is the sound first, meaning second, and, in this context, as a method Bly's may actually be seen as fairly traditional.

As a set, these poems treat the idea of grief again and again and, so, it seems to be what Bly himself brought to the table as he fiddled with the tools of his approach. Here is a beauty:

What Is Sorrow For?

What is sorrow for? It is a storehouse
Where we store wheat, barley, corn an tears.
We step to the door on a round stone
And the storehouse feeds all the birds of sorrow.
And I say to myself: Will you have
Sorrow at last? Go on, be cheerful in autumn,
Be stoic, yes, be tranquil, calm;
Or in the valley of sorrows spread your wings.


There are lots more fine pieces here, including the wonderful "The Big-Nostrilled Moose," "Turkish Pears," "Slim Fir-Seeds" and "Tristan and Isolde." So many fine pieces, indeed, that I'll be adding this book to the ever-expanding list of Near Perfect Books of Poetry. Not to end on too prosaic a note, here is the piece that is perhaps my favorite of the collection. Enjoy.

No one grumbles among the oyster clans,
And lobsters play their bone guitar all summer.
Only we, with our opposable thumbs, want
Heaven to be, and God to come, again.
There is no end to our grumbling; we want
Comfortable earth and sumptuous heaven.
But the heron standing on one leg in the bog
Drinks his rum all day and is content.

Email ThisBlogThis!Share to TwitterShare to FacebookShare to Pinterest
Labels: Hermit At Dawn (The), Orion The Great Walker, ramage, Robert Bly, Wanting Sumptuous Heavens, Watcher of Vowels (the), What Is Sorrow For

IS THIS "our" Robert Bly?

I remeber that he was in the front line marching on the Pentagon in (I think) 1967!

I seem to recall he was "big" on Neruda and Lorca

I got his Iron John around here some-wear

Thanks, Don, for your persistence, your joy, and your willingness to share.

Sad to say I've not had an opportunity to read any of Bly's poems before now.. I have a lot of catching up to do... being a relatively new poet and writer.

Thank you for this blog.. for me as a "young poet" it wasn't just informative.. but had made me eager to explore more in poet's I've not read before.

I've see the war fought in poetry about the role of form in expression. The building of poems almost seems contrary to the spirit of poetry to me. But at the same time, it also makes perfect sense in that more powerful meanings can be constructed than usually occur when one "opens a vein."

Ed, as always, the perspective is all ...

C, glad you like and find the work useful - I post what I think is important, philosophically and artistically.

Charles, thanks, this is in part what intrigued me about this set of poems. It's a sort of conjuring, formally, making folks see that that little bit of magic can be done both ways.

Bly...The Sea and the Honeycomb (his little anthology of tiny poems)...priceless...who else would do this?

Indeed; here's his (and C. M. Naim's) translation of Ghalib from there:

In this world of infinite possibilities
I look around for the second step
of desire!
All I see is one footprint!

Thanks for the great Bly posting, and others of late as well. As concerns Bly's work, I guess I'd say I'm "warm-hot" rather than "hot-cold". I just looked over my collection and find I have twenty-seven books by Bly . . . yet even so I had never heard of the one you reviewed in the posting. I have ordered a copy - thanks again!

I believe you are going to love this one. Believe me, I don't put anything on the "Near Perfect List" lightly.

This book gave me a big lift after reading a month's worth of Billy Collins for poetry discussion.