"Better a live Sparrow than a stuffed Eagle": The Rubáiyát of Omar Khayyám 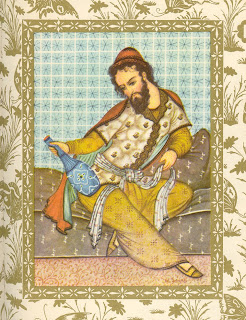 In life, death informs all things. Think of it as the booby prize of cognizance. This is as true for those who choose to repress it, perhaps even more so. It's the primary reason Freud got to have what has euphemistically come to be known as a consulting room (check out Ernst Becker's groundbreaking The Denial of Death to let all this sink in, long and hard).

For those who might like their answer in a more timely, lyrical fashion, there is the Rubáiyát of Omar Khayyám as translated by Edward FitzGerald. I was recently reminded of the Rubáiyát by an article in the Times Literary Supplement (January 9, 2009) entitled "The Angry Omar," though it might more appropriately been titled "The Wine-Soaked Omar." It is a fine article written by Daniel Karlin, fine enough to prompt me back to the Rubáiyat, which I've haven't visited in many a year.

In the Persian text the rubáiyat are independent poems, grouped according to custom by end-rhyme. FitzGerald saw how some of these separate poems might be linked to form a narrative and argumentative sequence, by analogy with the classiccal Greek or Latin "ecolgue."


(FitzGerald's) attitude to translation is summed up in a phrase that has become the rallying cry of "free" translators against their literalist opponents: "Better a live Sparrow than a stuffed Eagle."


There were five different editions of the Rubáiyat in FitzGerald's lifetime and, since they are all relatively brief, being composed of anywhere from 73 quatrains to just over 100, frequently all 5 are published in the same volume. The verses I've chosen to highlight all come from the final 5th edition. Enjoy.

Come, fill the Cup, and in the Fire of Spring
The Winter Garment of Repentence fling:
---The Bird of Time has but a little way
To fly—and Lo! the Bird is on the Wing.

And look—a thousand Blossoms with the Day
Woke—and a thousand scatter'd into Clay:
---And this first Summer Month that brings the Rose
Shall take Jamshýd and Kaikobád away. ----

And those that husbanded the Golden Grain,
And those who flung it to the Winds like Rain,
---Alike to no such aureate Earth are turn'd
As buried once, Men want dug up again.

Think in this batter'd Carnavanserai
Whose doorways are alternate Night and Day,
---How Sultán after Sultán with his pomp
Abode his hour or two and went his way.

And this delightful Herb whose tender Green
Fledges the River's Lip on which we lean—
---Ah, lean upon it lightly, for who knows
From what once lovely Lip it springs unseen. ---------

(Think Isaiah: all Flesh is Grass)

Ah, my Belovéd, fill the Cup that clears
To-day of past regrets and future Fears—
---To-morrow? Why, To-morrow I may be
Myself with Yesterdays Sev'n Thousand Years.

Lo, some we loved, the loveliest and best
That Time and Fate of all their Vintage prest,
---Have drunk their Cup a Round or two before
And one by one crept silently to Rest.

And we that make make merry in the Room
They left, and Summer dresses in new Bloom,
---Ourselves must we beneath the Couch of Earth
Descend ourselves to make a Couch—for whom?

Well there is a little taste, of both sweet and bitter wine. I'll try to delve into more verses in a future post.

Speaking of second parts, in last week's archival posting of Lilliput Review poems, I promised a second dip into the double size issue, #53, from February 1994. Here it is.

a hilltop puddle
choked
with clouds

¶trees turned to fence
sky to window,
ocean to the drowning ground

Snow Chimes The End Of The Human War

Snowgrains strike
the rust-iron train trestle
above the frozen creek.
They clang loud as bell towers
in the world inside the dove's eye.
In our world,
they barely make any sound at all.

"I stood on the railway platform
waving good-bye to a blind man."

everyone's a masochist.
who hasn't shaved, bled?
those who grow hair free i'm sure
have refused butter on their toast?
turned off tv and yawned through a book?
altered their chemical makeup
just to stint the truth?

the candle that burns twice as bright
burns half as long i guess we burn
twice as long, we sad dim fuckers.

Well, those were different times, indeed. Here's a little something that sums up change nicely.

the sky colors
of dawn have changed
to summer clothes

And all those tiny blades of grass ... Don