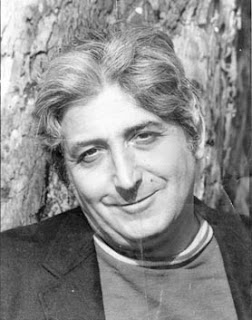 This is from Jack Micheline's latest volume, One of a Kind, which I mentioned in a previous post. All original punctuation, spelling etc. retained.

---I'm sorry I never made it, but I tried to do it my way.
I just could not find a courageous publisher with distribution.
None of my 9 books can be found in any American bookstore.
I want to thank you for your encouragement. It's been a
long hard road. Bobby Miller is still getting drunk in North
Beach on week-ends. He tells some good corny jokes he must
be close to sixty and he still chases girls—Goldfinger is still
alive in the Village. Walking the streets, that beautiful crazy
Jewish elevator man. Harold Anton has passed and your
drinking buddy the composer Chuck Mills has departed the
earthly plane. They had a Kerouac Conference at Boulder a
couple of years ago. You would have been proud of me. Ken
Kesey gave me the most valuable performance award. A
bottle of wine for Harvey Silver, and a bottle of whiskey for
Jack Micheline.¹ ­ I was really on that afternoon and I hope
you heard me up there in Heaven. I hear Bobby Donlin is
still alive managing some club in Cambridge. Charlie Min-
gus is also gone, passed away, gave up the ghost. People are
more frightened than ever now. The reason I never made it.
I wouldn't play the game or ball with the publishers, they
seem so self-involved, publishing mediocrity. Rick Kids play-
ing games with a pack of ass kisses always around them,
when was it any different. The arts is not for us poor kids.
we create because we have no choice. It is what we have
to do—no matter what. I swear I'm not jealous of these
people. with their power that is the way they show their
love. I guess I should have more compassion, they always
refuse to go for a walk in the sunlight. Frightened Men. The
Ring of fear. Sing me a song baby Blue. A song that rises to
the heavens. A song that dances with The Stars .. Sing me a
song Baby Blue. A song of the open road. You have a beauti-
ful daughter, Jack. By the name of Jan. I don't see much of
Allen and Peter. I was never close to them, they seem cold
and detached, they're lousy trying to make it. But you see I
always was a loner, A bare stick in the water, A hot piece, An
outlaw, a runner, Doing my chaotic happy dance across this
land. I want to tell you, I tried Baby. God knows how I tried
to say it like it was never said before.
---You know this world never loved genius, we exist in
spite of the world. I heard Charles Mills talking to the lions
once in Central Park. He wrote over 90 pieces of music in
his lifetime. I'm putting this book together—Let's Ride the
angel goodbye! I am staying with an old buddy from Chicago
now in Denver named Ken Krebs, you'll be happy to know
all your work has taken off all over the world. They read
you everywhere now. You are a departed legend of time,
and I guess you knew it all the time. I saw Carl Solomon at
the Kerouac Conference. He still lives with his mother and
works as a messenger boy. I was in TAOS New Mexico last
[break in manuscript] celebrating an art show at Shadoni of
Bill Gertz a painter friend. A guy you would have loved to
have known. He introduced me to Geronimo's grandson who
is a painter and a poet. Heavy dude you take one look at him.
He gives you the willies he is so real. Life goes on to the end.
I hope they are treating you nice in heaven. You know how it
was on the earth and I hope it's better up there.

P.S. your acquaintance Rainy Cass disappeared, The guy,
The sleepwalker from New Orleans, the guy who plays
the cornet and put out Climax Magazine. Some guy named
Willie put out a magazine called The Willie, he disappeared
too. It seems all the good people disappear. There are too
many phoneys in the world. The arts are loaded with them.
Somehow we must rescue the consciousness of man. Some
way some noble purpose must exist. Away to a new aware-
ness. At the Kerouac Conference Chellon Holmes was such
a Beautiful gentleman. He really loved you Jack. He called
you the great rememberer and read a soul stirring piece
about you, what rare, fine soul. and such a gentle spirit. Too
many people do not live their poems. We are still in the dark
ages baby. Bless you Jack your kind gentle spirit. Shig is still
alive and is very sick and has moved to Southern California
to spend his last years. The one armed [words missing in
manuscript]
---I hope you are well in heaven. And god bless the damned
and bless the angels too. bless em all the long and the short
and the tall, bless all their children and their bastard sons
Bless em all.
---Remember that song Jack
---Bless Em All!


A bare stick in the water.

Kerouac did an introduction for Micheline's first book, River of Red Wine, which is lost in a pile somewhere around here or I'm sure I'd be quoting that right now.

In any case, if you never knew how to talk to the dead, this has been your lesson. And when you speak like this, friend, the dead talk back.

someone else's affair
you think...
lanterns for the dead

And here's a little something from John and George in honor of George's birthday. Enjoy.

Very cool.. thanks for posting this. A really interesting read.
:-)

cool letter. thanks for posting it. there were some great lines in it.

I loved this...and what you said about the dead talking back. Thanks for that letter Don.

A letter like that tells us much of the world Silver lived in.

who I think was Harvey's mother my cousin is named after her or after another "Silver, Helen" who died earlier

on that same side of the family there are also some Yetta's who Yetta is Hebrew name for/of Helen Yetta being my mother's name (Henrietta)
born in Brooklyn or Manhattan in 1915..

yet another reason to love Jack and Jack. thanks, don. and thanks for the George and John. I went by Lennon's first NYC apartment on saturday, 105 Bank Street, which is around the corner (nearly) from Kerouac's White Horse...so this was a nice bookend to all of that.

and John Cage was at 107 Bank St
small world, eh