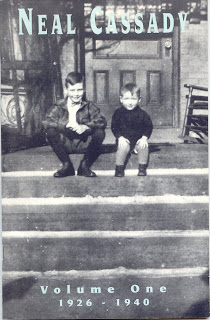 Sunday, February 8th, was the shared anniversaries of the births of Elizabeth Bishop and Neal Cassady. Each, in their own way, was a formidable figure of 20th century American literature.

Elizabeth Bishop is one of our finest poets, a poet's poet, as the saying goes. At the same time, her work, though not talked about generally as much as one would expect, is regularly anthologized. I've found it is appreciated by folks in the lifelong learning sessions on introductory poetry I've taught over the past few years; I'm planning to use the following in this year's session, coming up this April:

Oh, but it is dirty!
─this little filling station,
oil-soaked, oil-permeated
to a disturbing, over-all
black translucency.
Be careful with that match!

Father wears a dirty,
oil-soaked monkey suit
that cuts him under the arms,
and several quick and saucy
and greasy sons assist him
(it’s a family filling station)
all quite thoroughly dirty.

Do they live in the station?
It has a cement porch
behind the pumps, and on it
a set of crushed and grease-
impregnated wickerwork;
on the wicker sofa
a dirty dog, quite comfy.

Some comic books provide
the only note of color─
of certain color. they lie
upon a big dim doily
draping a taboret
(part of the set), beside
a big hirsute begonia.

Why the extraneous plant?
Why the taboret?
Why, oh why, the doily?
(Embroidered in daisy stitch
with marguerites, I think,
and heavy with gray crochet)

Somebody embroidered the doily.
Somebody waters the plant,
or oils it, maybe. Somebody
arranges the rows of cans
so that they softly say:
ESSO—so—so—so
to high-strung automobiles.
Somebody loves us all.


This poem was published in one of her four collections, A Question of Travel. The other three collections are North & South, A Cold Spring, and Geography III and, with the naming of the later, it is right to speculate that two of the former might be considered Geography I and Geography II (and I'm betting from the titles you can guess which ones). Nomadic all her life, much of her work centers on landscape and travel and, as in "Filling Station," the question of home. I love the way the traveler who pulls in for gas is at first apprehensive and, indeed, perhaps even frightened, but when she begins to look about and question what she sees, an unexpected realization is made. As with much of the work of Billy Collins (which I've been reading quite a bit of over the last month in preparation for a poetry program), the poem itself is something of a journey and the irony is not hard to gather here. Her use of the word "doily" seems transcendent; one hears echoes of the words that came before, so this almost seems a portmanteau construction from "dirty" and "oily."

Her work has recently and deservedly received the imprimatur of the Library of America.

Here's an excerpt from a letter by Neal from jail to his wife Carolyn, published in Grace Beats Karma: Letters from Prison. 1958-1960, which gives just a taste of what Kerouac was trying to capture in his portrait of him.

Dearest daft dove deliberately doubling deft devotion despite despair dripping dumbly down delicately dim decolletage deserving diametrically different dissectional dressing—drenched daily in daddy's deepest dedication—to you, Lady of the Gardenias, Carolyn, wife dearest; Just as little as did the Druids in Gaul 22 Centuries ago suspect their annual late autumn blood & harvest gleaning sacrifice to Shaiman, God of the Dead, would eventually degenerate into tonites small fry trick or treating hollow culmination, did, I'll wager, you guess when writing it that "Hallelujah, the Pope is dead" would nigh make you a byword here synonymous to the opposite of your true character by exciting, without excepting P. Donovan's two negro friends, every convict who saw it to comment in admiration as misunderstood as it was genuine, "Jeez, what a tough (means great) broad", "Man,what a swingin' chick ya got", & the topper, from an older felon absolutely bugeyed in disbelief, "Where's she doin' time?" Anyway, I, not having fully forgotten Cayce, knew how you meant that already almost classic final line—say, just this second, as I wrote "classic", a faint recollection struck of some famous Prince or King in history dashing into the castle's great hall proclaiming "Hallelujah, the Pope is dead"; no doubt the "cons", you & I were all standing there thunderstricken—& was altogether proud of your performance, so amusingly mistaken by them, still it is true, as my initial letter this month stated, that I did feel a foolish twinge at Pius XII's passing, somewhat, perhaps, because of two detailed biographies I read, but mostly, due, I think, to heightened sensitivity toward anything familiar that jailing always produces in one, because my priest Godfather had talked with him 3 times rather recently & this closeness by proxy had somehow helped impress on me his true saintliness—of course, at 82 practically anyone can assume that aura, note Churchill, now 84, or Elinor, 76.


And it goes on, building and building, referencing Simone Weil and the Catholic Church complicity with Nazism and the installation of John XXIII. While the above captures the brezzy hipster conversational style Kerouac perfectly mimicked in On The Road, there is a density of reference here that belies the man who spent a great deal of his early years in and out of reform schools, receiving very little formal education. Many claim Cassady was himself the inception of the Beats; it's hard from this excerpt to doubt it and so realize how very lucky Kerouac and Ginsberg and all were to call him friend.


darting to the beat
of the downpour...
a swallow

There's a letter that you need to have a dictionary at hand to read.

great post. Cassady definitely has that Beat/stream of consciousness style. i still have yet to read "On the Road." don't know how that happened.

Great choosing of the excerpt from one of Neal's letters from SQ. A typical example of his drive-energy coming through in his writing. Thanks!

(I don't understand the comment above about needing a dictionary at hand to read the letter-excerpt. the vocabulary of the letter-exceprt is basic, yes? I followed along easily).

Thanks Greg and Steven, glad you liked it. It just jumped off the page. I thought Charles may have been referring to the many layers of allusions in the letter ...
I'm sure he could explain.

I wonder if you could elaborate on why Bishop's _Geography III_ gets its title through some relation to the other title's of her collections.

It's been a while since I read it, but doesn't _Geography III_ open with a quote from a child's primer called Geography III?

Well, David, thanks for the question. As I mentioned in the post, I've used Bishop's poetry in a poetry intro session I do every year and, of course, I research the work I'm going to use. The importance of travel, landscape and home is paramount in her work. I feel the titles "North and South" and "A Question of Travel" both are grounded in this overarching theme of her life's work. The title "Geography III", as you point out opens with quotes from a geography text book. I have "The Complete Poems" on hand and not the volume "Geography III" itself and in the "Complete Poems" the quotes are stated to come from a book entitled "First Lessons in Geography," published in 1884, slightly different from what you noted. It's not uncommon for there to be editorial differences between editions, of course. Born in 1911 and raised by her grandparents in isolated Nova Scotia, one might easily imagine that this would be a volume possibly in her home, perhaps even a cherished copy, or accessible at a local school.

I'm not sure where I ran across the idea of other volumes of her work being viewed as Geography I and Geography II. I don't believe it is original with me (I have nary an original idea in my head), but probably something I found in the criticism. It is something that has stuck with me over the years, however, because, wherever it originated, it resonated: it had the feel of truth. It is an excellent way to put her body of work in perspective.