A Pair of Nines (Plus): Richard Brautigan, Galway Kinnell, and the Lilliput Archive 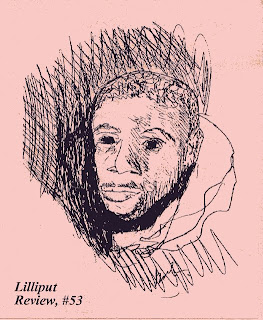 Tuesday just seems to swing around before you know it, so it's time to dip into the Lilliput Back Issue Archive. Before hitting that, let's thread some loose ends into a post-modern early Valentine and, oh, yeah, supply an update on all things (Lilliput) print and publishable.

I've begun printing up the new issues and stuffing contributor envelopes, a process that usually takes about two weeks. Following that, regular subscription copies of issues #'s 167 and 168 will begin shipping, that's about 3 weeks out. That process takes about 4 to 6 weeks on its own.

Simultaneously, I've received the Basho Haiku Challenge chapbook proof back from the proofer. The usual bonehead typos and logistic hiccups will be corrected and copies will begin to print up and probably ship sometime around March 1st (yeah, that's simultaneous with the above - don't ask). Stay tuned for further updates.

Meanwhile, back on the blog front, while checking out the work of Langston Hughes, Galway Kinnell and, Richard Brautigan, all who had birthdays over the past 5 days, I ran across a pair of nines I thought I'd share:

It's night
and a numbered beauty
lapses at the wind,
chortles with the
branches of a tree

plays shadow dance
with a dead kite,
cajoles affection
from falling leaves,
and knows four
other things.
One is the color
of your hair.

When one has lived a long time alone,
and the hermit thrush calls and there is an answer,
and the bullfrog head half out of water utters
the cantilliations he sang in his first spring,
and the snake lowers himself over the threshold
and creeps away over the stones, one sees
they all live to mate with their kind, and one knows,
after a long time of solitude, after the many steps
taken
away from one's kind, toward these other kingdoms,
the hard prayer inside one's own singing
is to come back, if one can, to one's own,
a world almost lost, in an exile that deepens,
when one has lived a long time alone.


Because the Tuesday post usually has a few general lyrical news items, here's one to turn Valentine's day, um, inside out: 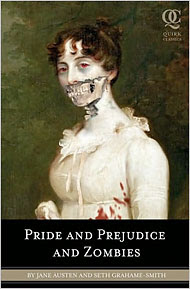 Two accounts relating the above "phenomenon" may be found here and here. Though the NYT's use of the above cover is salacious (spell check read this as "delicious"), Guardian UK nearly trumped it with a nice panel from the original "Night of the Living Dead." Truly, after Zombie Haiku Miss Jane could not be far behind.

Any day now, someone is going to officially declare the zombie revival (un)dead. My apologies; things have been a bit jumbled around here the last few weeks, so it seems perhaps I best leave my mixed up holidays right here. But a little humor goes a long way when untangling thread.

This week's back issue is Lilliput Review #53, from February 1994. This issue had an extra 8 pages, for a truly brobdingnagian total of 24. I believe I've mentioned before that the further back in time I go, the more removed I feel from the type of work I look for now. The magazine has been something of a life journey, a lyrical journal composed with the words of others. Who I was 15 years ago is at once distinctly different and fundamentally the same as who I am today. Perhaps even the selections I make from the work back then are tinted by the way I see things now. It's been a long strange, trip, as the poet Robert Hunter said. Next month will be the 20th anniversary of the publication of the 1st issue of Lillie and I guess that has me looking back, as well as forward. For now, let's dip in and see what was happening 15 years ago this month, on the short poem front, through the lens of a particular small press editor.

a caterpillar covering itself
with the scales of a lizard.

everywhere in
the pink dress,
her body snaps


Pissing and trembling -
laugh at me crickets

Separation(s)
---with apologies to Issa

After dinner,
empty wine bottles stand in judgment.
I relieve myself from your porch
and fall ass-backwards
over the moon.

shaved the poet
in half-moon
with words of broken ice.


Since this was such a large issue and the selection above comes from only the first half, I'll revisit #55 next week for the second half.

One final side note of interest: this was Issa's first appearance in a Lilliput publication.

hear the sounds the words evoke? entirely sound and sense and word.... ONE!


a Master (poet) here. and, in the 60's (and earlier) quite into "street" level politics

"cantilliations" some word! to use in a poem perfect
reminds me of that Poe word the sound the bells make


I run the risk (aGAIN) OF LOSING (what is left of) my credibility!

Now I finally get who Issa was! I have to admit I've been wondering....

Ed, glad the Kinnell hit home, yes I heard he was an activist back in the day ... lifting us all up ...

Keddy, Issa, indeed, patron of all things, the smaller, the poorer, the more cherished ... Don