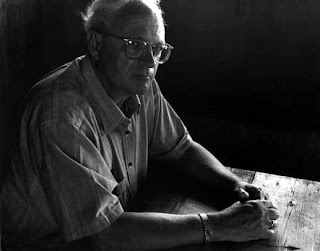 Todd Moore: R.I.P
I've just received news over on Facebook that Todd Moore has died. We seem to be losing some of the best of the small press this year. Since I can't find anything up (update: info coming in as I type, see below) about it on the web except at his Facebook page, I'm going to put up these links in tribute.

An interview with Todd Moore

Another Interview with Moore

you link to Outlaw Poetry

these days I am
thinking
that we write poems
and do art
(those of us who do)
do it
because we gonna soonly die!

Sad.
The haiku expresses it best.

not exactly in today's "box"

while my guitar gently weeps

heck man.. there is PRINCE playing a one-hell-of stream of licks!


I think that this is the induction "thing" of The Beatles.

Ed, many thanks for posting all the links to Todd Moore. Just wanted to inform you that I created a seperate Todd Moore page with all the poems, essays, reviews etc.etc. he send to me since 2007. ( everything will still remain on the Outlaw Poetry page). It's quiet a lot of stuff and I'm very proud that Todd gave me the chance to publish his work on my page. Hope this "extra" page will show how I was ( and still ) personally related to Todd Moore. Thanks for spreading out the word.

it's just another
haiku moment
at least you didn't call me
Hunter!

heck: Todd was only a cpl years younger than me!
I best get my "shit" together, eh?

...in whatever age, it is always too early!

You're welcome, MK, your page is one of the invaluable resources on the net ...

Thanks for putting the Todd pages all in one place ...

Also the 201 links to poems etc. on the right sidebar under Todd's name ...

at this, my heart breaks.

Thanks, Jhon ... I remember reading Todd Moore's Dillinger books back in the 70's/early 80's when they first appeared. Unique and powerful ...

Dreadful news; I am truly shocked.

Sorry for the bad tidings, Glenn.

Hi, I added some Todd Moore audio files on the tribute page. You can listen to it under http://www.toddmoore.outlawpoetry.com