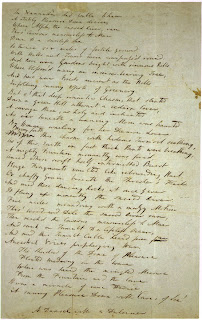 I have to admit never having been a fan of the band Rush. There was just a certain something that didn't quite click for me. However, when I began to collect songs over a year ago for the feature that became the weekly Issa's Sunday Service, they were one of the first bands that jumped out. Not with just one song, but with many, many songs.

The storied history of Samuel Taylor's Coleridge's Kubla Khan is the stuff of lyrical legend. This week's selection quotes liberally from its source material:

"To seek the sacred river Alph
To walk the caves of ice
To break my fast on honey dew
And drink the milk of Paradise...."

I had heard the whispered tales
Of immortality
The deepest mystery
From an ancient book. I took a clue
I scaled the frozen mountain tops
Of eastern lands unknown
Time and Man alone
Searching for the lost ---- Xanadu

Xanadu ---- To stand within The Pleasure Dome
Decreed by Kubla Khan
To taste anew the fruits of life
The last immortal man
To find the sacred river Alph
To walk the caves of ice
Oh, I will dine on honey dew
And drink the milk of Paradise

And, least one become confused, the original follows in all its "incomplete" glory. First, here is a prefatory note by the poet as to that storied history:

"The following fragment is here published at the request of a poet of great and deserved celebrity, and, as far as the Author's own opinions are concerned, rather as a psychological curiosity, than on the grounds of any supposed poetic merits. In the summer of the year 1797, the Author, then in ill health, had retired to a lonely farm-house between Porlock and Linton, on the Exmoor confines of Somerset and Devonshire. In consequence of a slight indisposition, an anodyne had been prescribed, from the effects of which he fell asleep in his chair at the moment that he was reading the following sentence, or words of the same substance, in 'Purchas's Pilgrimage':

Here the Khan Kubla commanded a palace to be built, and a stately garden thereunto. And thus ten miles of fertile ground were inclosed with a wall.

The Author continued for about three hours in a profound sleep, at least of the external senses, during which time he has the most vivid confidence, that he could not have composed less than from two to three hundred lines; if that indeed can be called composition in which all the images rose up before him as things with a parallel production of the correspondent expressions, without any sensation or consciousness of effort. On awakening he appeared to himself to have a distinct recollection of the whole, and taking his pen, ink, and paper, instantly and eagerly wrote down the lines that are here preserved." "A person on business from Porlock" interrupted him and he was never able to recapture more than "some eight or ten scattered lines and images."


Kubla Khan; or A Vision in a Dream: a Fragment

In Xanadu did Kubla Khan
A stately pleasure-dome decree:
Where Alph, the sacred river, ran
Through caverns measureless to man
Down to a sunless sea.
So twice five miles of fertile ground
With walls and towers were girdled round:
And there were gardens bright with sinuous rills,
Where blossomed many an incense-bearing tree;
And here were forests ancient as the hills,
Enfolding sunny spots of greenery.

But oh! that deep romantic chasm which slanted
Down the green hill athwart a cedarn cover!
A savage place! as holy and enchanted
As e'er beneath a waning moon was haunted
By woman wailing for her demon-lover!
And from this chasm, with ceaseless turmoil seething,
As if this earth in fast thick pants were breathing,
A mighty fountain momently was forced:
Amid whose swift half-intermitted burst
Huge fragments vaulted like rebounding hail,
Or chaffy grain beneath the thresher's flail:
And 'mid these dancing rocks at once and ever
It flung up momently the sacred river.
Five miles meandering with a mazy motion
Through wood and dale the sacred river ran,
Then reached the caverns measureless to man,
And sank in tumult to a lifeless ocean:
And 'mid this tumult Kubla heard from far
Ancestral voices prophesying war!
The shadow of the dome of pleasure
Floated midway on the waves;
Where was heard the mingled measure
From the fountain and the caves.
It was a miracle of rare device,
A sunny pleasure-dome with caves of ice!

A damsel with a dulcimer
In a vision once I saw:
It was an Abyssinian maid,
And on her dulcimer she played,
Singing of Mount Abora.
Could I revive within me
Her symphony and song,
To such a deep delight 'twould win me,
That with music loud and long,
I would build that dome in air,
That sunny dome! those caves of ice!
And all who heard should see them there,
And all should cry, Beware! Beware!
His flashing eyes, his floating hair!
Weave a circle round him thrice,
And close your eyes with holy dread,
For he on honey-dew hath fed,
And drunk the milk of Paradise.

Listening to Rush's "Xanadu," the synth recalls all the excess of a decade that helped redefine the word. Does it work for a poem which, in its own way, is garishly over the top? I'll leave it to you to decide.

I'm still stuck on that synth - seems there is a what part of get over it I really don't I understand.


This week's featured poem comes from Lilliput Review #72, August 1992 (6 more poems, plus the cover from this issue, may be found in this previous post).


mocking myself
i see
both faces


Which, of course, brings to mind Mr. Pound and his reverence for ancestors:

In a Station of the Metro

The apparition of these faces in the crowd;
Petals on a wet, black bough.


But how can Issa not have the last word:

not giving a damn
that plum blossoms fall...
his stern face


PS A complete list of all 47 songs is available on the stand alone LitRock website, along with a jukebox to listen to songs separately or altogether. Of course, the Jukebox is also available on the sidebar of this page.
Posted by Issa's Untidy Hut at 9:05 AM

A damsel with a dulcimer
In a vision once I saw:
It was an Abyssinian maid,
And on her dulcimer she played,

His flashing eyes, his floating hair!
Weave a circle round him thrice,
And close your eyes with holy dread,
For he on honey-dew hath fed,
And drunk the milk of Paradise.

it may just be "all" about a music .. maybe even, beyond everything... a single note/tone?

I'll have some of what Coleridge was drinking (or smoking).

I've thought from time to time that it should be possible to compile a small (possibly) but interesting anthology of pre-20th century poems influenced by mind-altering substances, or dealing in some way with the experience.

Besides "Kublai Khan," the pre-eminent example, I think offhand of Tennyson's "The Lotos Eaters," various poems by Blake, probably some passages from Shakespeare (A Midsummer Night's Dream comes to mind right away), possibly Keats, surely others I'm not thinking of offhand.

Jim, oh, oh, I think it was the big "O", for medicinal purposes, natch ... I got a few things need treatin'

Lyle, just think about all those magic potion poems/stories, particularly the German romantics. Even in the Eastern tradition. I think it is a great idea and the anthology would be formidable.

As always, your work, the celebration of art and meaning, is intense. I thank you.....pajamas

op, means a lot, coming from you - many thanks.